Ducks Gameday -- Battle of the Worsts!

Share All sharing options for: Ducks Gameday -- Battle of the Worsts!

Oh no! It's a potential state rape. After the L.A. Kings shut out the lowly Columbus Blue Jac... wait, what? They GOT shut out?! By Curtis Effin' Sanford?! HAHAHAHAHA.

Of course, the Ducks have yet to beat the Blue Jackets in one try this season, and I've got very little confidence that today'll be any different... 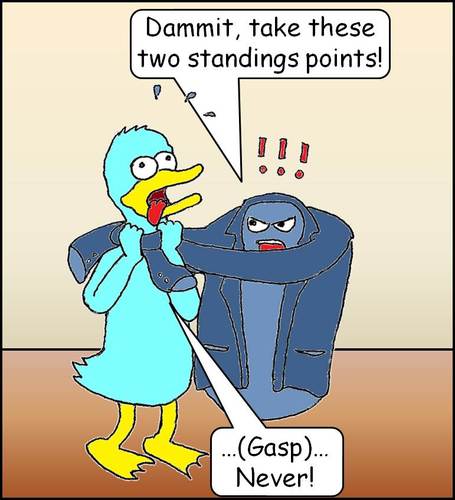 Sunday Bonus: today's Sleektoon was drawn in the choir loft! :)

...but when we're talking about the league's two worst teams, I guess anything is possible! After the jump, updated Fail For Nail projected standings!

Once again, I've highlighted today's two opponents, who have a pretty decent lead on all other regularly-losing clubs. Since last post, all sub-.500 teams picked up wins except the Islanders, Oilers, and Lightning -- the Calgary Flames were even able to win their way back up to .500 and off the table for now.

Anaheim can pass Columbus on these standings with a regulation loss tonight -- I believe! :)

I'll be around for game comments tonight -- stop on by for some easy laughs.