Yesterday, Meg and I were having the following conversation on Twitter: 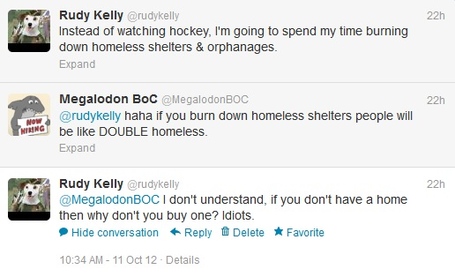 You know, the typical erudite conversation that led the Times to refer to us as "the songbloggers of our generation." Then we received the following tweet from Spade:

At first I thought it was one of our usual delightful Spade tweets, albeit one that was missing a comma. Then I thought about where a comma should go...

"no, use the homeless as taliban spies"

"But wait," I said to my annoyed co-worker, "We never mentioned doing anything about using the homeless, therefore Spade's tweet couldn't make sense!" Could Spade have just been dumb? No, that couldn't be it, not Spade. Then, with increasing horror, I moved that comma little to the left...

"no use, the homeless as taliban spies"

Mother of God, do you see what has happened? Clearly Spade has discovered a secret underground network of terrorists that disguise themselves as the homeless! Or possibly homeless people who then joined the taliban, I'm not sure which! And he's obviously on the run from this homeless Taliban sect, that's why he couldn't properly compose his tweet! Maybe he's been running for years, fumbling with his phone while running at top speed for every comment! It makes so much sense now.

Except he should have written "are" instead of "as," but he probably just fucked up.

Godspeed, Spade. I love you. Please stay far away from me, I don't want to die or have a homeless person touch me or anything.