The Sharks visit the Rangers for an exciting Columbus Day match-up!

Another cancelled game, another report from THE SITE, a mysterious website posting the incredibly detailed results of a fake(?) season.

-Ryane Clowe got suspended for three games for his spear on Bobby Ryan in the team's season opener, so didn't play in this one.

-Antti Niemi got pulled in the second period. Thomas Greiss came in and didn't allow any more goals.

-Weirdly, the game recap mentions that this game took place on "Columbus Day." Columbus Day was on the 8th, so I guess this is a joke or a mistake or something. Unless....is there such a thing as CANADIAN Columbus Day? I'll have to do some research.

Anyway, that's enough fun with THE SITE for now - reading the damn thing makes my eyes itch - so here is a very timely cartoon from meetyourmako: 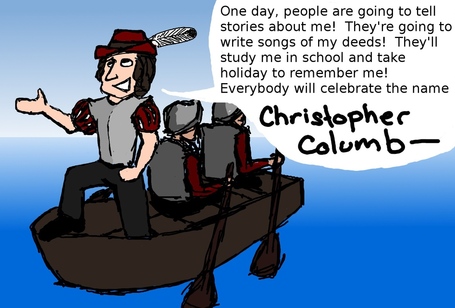 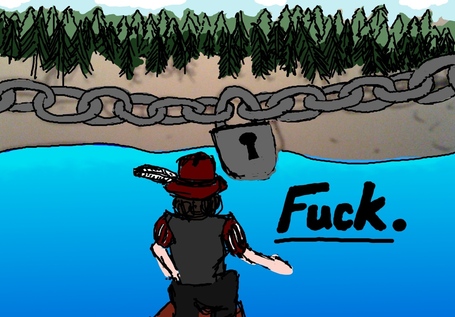 In other news, here is an e-mail I received:

I'm Torrey's Tacos on SB Nation and I've been reading BoC and I was wondering, because I'm pretty damn clueless, which site is this fake league taking place on? The one with the hard-to-read font and the Sharks beating the Ducks 3-1 ... I'm not good at locating stuff.
-Torrey's Tacos

I want to reply, but for some reason every time I try to send an e-mail about THE SITE I get signed out of my Gmail. I'll just respond here:
Dear Mr. Tacos,
I'm afraid I can't tell you exactly what site I'm getting these game results from, since you have to be a member to join and one of the rules of membership is you can't give out the link. It's all very mysterious. I explained how I found out about THE SITE in an article you can find here, so I hope that answers most of your questions.
Thanks for reading!
-Megalodon
Finally, for Book Chat this week, I think A Modest Proposal for Preventing the Children of Poor People From Being a Burden on Their Parents or Country, and for Making Them Beneficial to the Publick is a very important and entertaining piece of writing.