Dan Boyle is too old for this shit, Patrick Marleau can't stop crying, and Kevin Kurz CORRECTS HIS USE OF the word "admonish."

Hey, do you guys want to talk about the lockout?

No? Oh. Sorry, that's all I have for you today.

Whatever, you're not the boss of me.

Today I'm going to take a look at Kevin Kurz'z report on Dan Boyle and Patrick Marleau talking about the lockout. I'll go through and offer my reactions to some of the things Boyle and Marleau had to say, and I'll probably say a lot of bad words.

Important note: when people are talking about negotiations like this a whole lot of what they say is public relations bullshit, so even though I happen to be on the same side of this issue as Boyle and Marleau I'm going to point that bullshit out when I see it.

Now on to the article:

Sharks defenseman Dan Boyle has been one of the more vocal and outspoken NHL players when it comes to the current labor battle between the league and its players’ association. Already one of the more open and honest voices in the Sharks’ locker room when actual hockey is taking place, the 36-year-old couldn’t hide his disappointment on Thursday that the two sides have yet to make an agreement.

Maybe it was the fact that he’s battling a cold and not feeling 100 percent.

"It sucks. Even though I went through it once it doesn’t make it easier," said a glum Boyle, referring to the 2004-05 lost season. "If anything, it’s just more frustrating to lose possibly a second year of my career. Careers are so short to begin with, to just have that taken away is pretty frustrating."

It has been talked about before, but I still don't think people understand how much this lockout is screwing over the Sharks, specifically. Even if you think the team didn't have a very good chance to win the Cup this season anyway, you'll probably admit that their chances this season are better than they will be next season, barring some sort of major trade. All of San Jose's best players will be one year older next year, on the wrong side of their peak production seasons.

For fans of some shitty team like, say, the Ducks, losing this season is almost sort of a blessing - it's one fewer season of having to cheer for a bunch of losers who aren't even going to make the playoffs. But for the Sharks and Sharks fans, to have had the last two lockouts BOTH occur during years when the team was one of the best in the league, well...well "fucking hell" is all I have to say about that.

If you're a Sharks fan who wants to be optimistic, I suppose you can say that there is still a chance the league will play a shortened season, which might actually benefit a team with older superstars like the Sharks.

I guess that could happen, Timmy, and I hope you're right. I really do.

That the league didn’t even really consider what the NHLPA put on the table irked a number of players, including Boyle.

"Sleep on it, look it over, discuss among the other 29 owners and then come back with a no, if that’s the case," Boyle said.

Somewhat surprisingly, Boyle didn’t admonish his own side from helping to contribute to the stalemate.

"It’s supposed to be a negotiation, and I think right now both sides kind of think it’s their way or the highway. I think you’re got to give to get, and I don’t know that we’re at that point yet," he said.

Yeah I heard Patrick Marleau started crying when he found out he wouldn't get to watch that one guy at the arena sharpen skates any more. That's Marleau's favorite part of being a professional hockey player.

"[The owners’ proposal] started talks, and then they kind of shut them down as soon as we started talking," Marleau said. "They wanted 50-50, we got to 50-50, and they took 10 minutes to disregard three proposals where we actually took their offer and took some time to dissect it.

Man this 50-50 thing is a nightmare. It seems to be working with a lot of stupid fans on the outside since it seems fair, but really it's a win for the owners. Plus that doesn't even touch the larger issue of "50-50 of WHAT money, exactly?" which is where Marleau is coming from here - the players offered proposals that could be considered 50-50 splits if you squint, and the owners just threw them all in the trash.

It's really awful that this lockout is happening at the same time as the presidential election, because I'm exhausted from wading through all the PR-speak fuzzy number bullshit that's coming out of both events.

"They come out and they say they want what’s best for hockey, but then their actions don’t back that up. It’s kind of happened throughout the whole negotiations, so at this point we don’t expect anything less, I guess, out of them."

Obviously, this is bullshit. The owners can (and probably have) said the same thing about the players. The fact is that if either side actually cared about NHL hockey more than they cared about their own financial situation then we never would have had a lockout. But that's not the case, and that's fine. We can be grownups about it. This is a fight about money, because the NHL is a business. I wish we didn't have to indulge in this illusion that both sides are some sort of holy warriors fighting solely for the good of hockey.

Money's a fine thing to fight for, guys. It lets you buy all kinds of great stuff.

Should there be no progress over the next couple of days, it's not hard to predict the immediate future. It was widely reported that the league has since taken its last proposal off of the table, now that its Oct. 25 deadline to get in a full, 82-game season beginning on Nov. 2 will quietly pass. The fear now is that the league will soon cancel another month’s worth of games, never to be made up, as well as the Winter Classic and All-Star Game.

The owners took their last proposal off the table because the players didn't completely accept it by some arbitrary bullshit deadline. Hey, owners: this is not how mature adults negotiate things, you rich fuckheads. God damn it.

Boyle agreed, and has said in the past that he believes the league’s hard-line owners want the players to miss some paychecks. That’s all but a certainty now.

"It seems that way. Again, I’m not in their locker room, but it seems like there’s a script there," he said. "I told you months ago that I didn’t think anything was going to get done until we started losing some checks. How many, is the question. I don’t know. It seems like they are following some sort of guidelines, or whatever, but I’m not in their heads, either. I’m just speculating."

Boyle thinks the owners are meeting in a locker room? Man, these two sides really AREN'T speaking the same language.

Boyle hasn’t sensed any discord amongst the union, though.

"That’s the thing is, I don’t really hear that," he said. "There’s escrow money coming back from last year. Obviously, everyone would like to be making money, but I just don’t hear about guys whining about it, really."

Except Dan Ellis, but what else is new.

Here is a graph I made of CBA negotiation progress thus far: 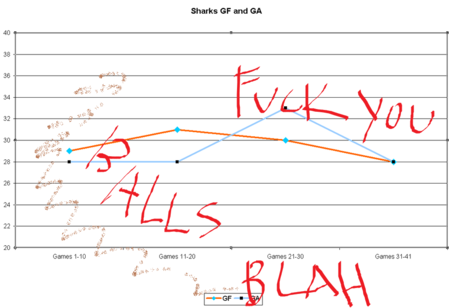 Moving on to tonight's game report from THE SITE:

-The Sharks haven't really hit their stride yet this (imaginary) season.

-According to the game report, Dan Boyle missed this game due to illness.

-Logan Couture has been a consistent bright spot for the Sharks this season. He leads the team in goals.

-Joe Thornton, of course, leads the team in assists.

-Ever since the odd occurrences surrounding my last interaction with THE SITE, I've been a little gun-shy about the whole thing. I also haven't been sleeping very well.

No book talk today, but I'll have something for tomorrow's game day.