Since I didn't have any book talk yesterday, today's post will be nothing but!

I have a book called The Great Thoughts, which is a collection of quotes from people throughout history. It was published in 1985. It belonged to my grandfather, who went through the entire book and circled stuff he liked and added little notes as well. This is really really cool.

Here are some quotes from the book and my grandpa's notes on them. Maybe something here will help to keep up your spirits during these dark lockout times?

"O my soul, do not aspire to immortal life, but exhaust the limits of thy possible."

My grandpa added a note here: "Some of these old Greek dudes have a pretty good understanding."

This is a quote from Lord Shang, Prime Minister of the State of Chi'in in the 4th Century B.C.:

A quote from Arthur Schopenhauer:

"No truth is more certain than this, that all that happens, be it small or great, happens with absolute necessity."

A quote from my grandpa's favorite philosopher (and mine!), Bertrand Russell:

"That they [the dogmas of religion] do little harm is not true. Opposition to birth control makes it impossible to solve the population problem and therefore postpones indefinitely all chance of world peace.

"No one has ever died an atheist." 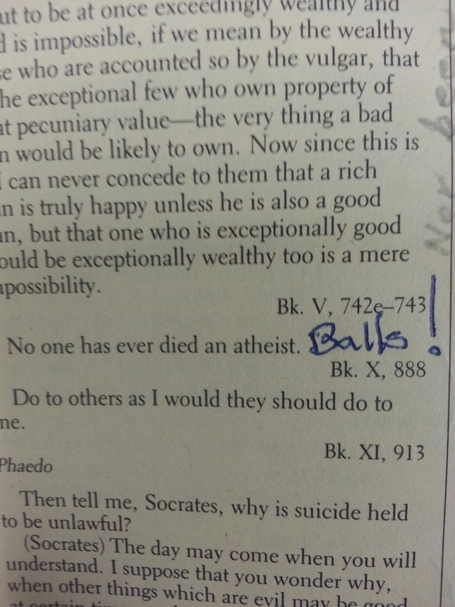 Maybe it's better that there isn't any hockey going on, with all the losses the Sharks have been suffering according to THE SITE.