Time to kill the shootout

Let's take the shootout out behind the ol' barn. Stop crying!

Share All sharing options for: Time to kill the shootout

Deciding a winner in sports can sometimes be a tricky thing. The NBA just keeps using extra time. Theoretically, a game could go on forever. The same with baseball. The NFL has a completely flawed, idiotic system where ties still happen and winners are decided by a coin toss, while their collegiate counterpart’s version is actually pretty awesome. Soccer has shootouts. Or extra time. Or sudden death. Maybe all three. Or just ties, it changes on a daily basis I feel. They don’t really know what the hell they are doing. Then there is the NHL. They used to have ties until they realized those resulted in some lame ass games. Thus the shootout was added. Plus there is also the point system, which is dumb as fuck just to mess with people. Now we all hate the shootout*, but do not fear, good people, I have the solution.

*I hate the shootout and I speak for everyone

Obviously ties are simply something we cannot go back to. Those were the dark ages. Teams would play just to get a tie and get one point, and nothing was worse to watch than having two teams act like total pussies and just wait for the game to end so they could get orange slices and go home. The shootout basically has teams do the same damn thing, except before they get their postgame treats they have to partake in a skills competition. The only reason the NHL hasn’t gone to a winning percentage standard to determine the standings is mostly because of the shootout also. So you have a crapshoot, and teams that shouldn’t be awarded dick getting points for sitting on the puck until the end of regulation. This is some serious bullshit, and I will not stand by.

So, no more ties. No more shootouts. No more stupid Bettman points. Here’s what they should do, and Gary, my phone is waiting for your call to thank me, you sad little man: Keep the four-on-four play, five minutes, and add five more minutes for three-on-three. What’s that you say? This isn’t original you say? Well, just you wait because I just got done huffing some carnie approved paint. The coup de grace is to turn the clock off and keep playing until someone scores. The teams return to playing five-on-five. The catch is that now there are no goalies. Teams can place whatever fat ass in front of the net to block shots, but covering the puck is a no-no. Best of all, there is a clear cut winner and it’s not up to goalies or Jarret Stoll to see who wins. You also get a good bit of clown hockey as players are likely to try to shoot the puck from every which way while you have guys like Matt Greene leaping all over the place to try and block shots. What could go wrong? 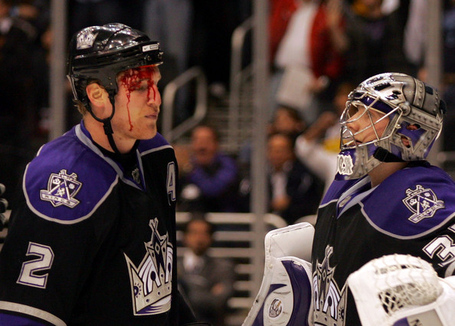 But it was great when it happened!

Fine, you bunch of candy assed multi-grain bagel bitches, keep the stupid shootout. Or better yet, just have a best of three Roshambo between the goalies. Or an eating contest. Dustin Penner would be getting huge contract offers from everyone then, and not just from the psychopaths that live in Edmonton. Or the NHL can start using soccer sized nets and have the players try and kick the puck in past lumbering marshmallow men. Is that what you want? Soccer? Just because there are a few states that have legalized pot doesn’t mean we are a hippie Euro nation suddenly. So just take my idea and say it’s great. Thank you. While I’m thinking of it, here are some other great ideas to decide winners in case of a tie in other sports:

Lastly, what time is it? 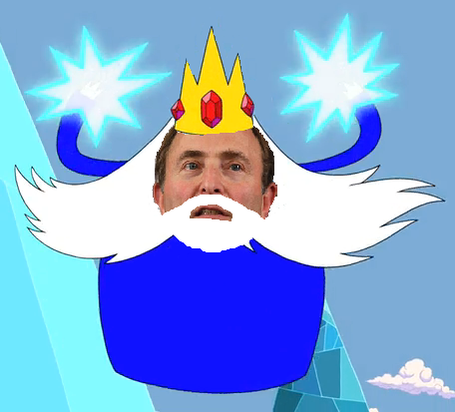