(As with all of the Patrick Marleau Facts posts, this is a collaboration between Rudy and me)

Patrick Marleau has been in the news a lot recently, due to our old friend Jeremy Roenick taking a bunch of his drunken ramblings and turning them in to a "book." I think Rudy summed up what went down between Roenick and Marleau perfectly:

"So it was Thanksgiving but I wanted to tell Marleau that he was sucking and ruining everything. I went over and told him and he listened but he didn’t listen hard enough. What an asshole that guy is!"

I used to like Jeremy Roenick. I defended him.

I was wrong. Roenick is a prick.

To counter some of the negativity Roenick has sent Marleau's way, we at Battle of California would like to present the latest installment of our series celebrating the incredible true life of Patrick Marleau. These are: PATRICK MARLEAU FACTS: LOCKOUT EDITION.

-Jeremy Roenick once asked Marleau if he could pass him a water bottle and Marleau replied, "Sure, I could..."

-Marleau was never able to live down the time he called Ron Wilson "Mom."

-One time Jeremy Roenick asked Marleau if he had a tissue and Marleau took one out of his pocket and gave it to Roenick. Roenick used it but he later began to seriously suspect that Marleau had been carrying a used tissue around in his pocket.

-When Patrick Marleau doesn't get what he wants he holds his breath until he wets his pants. 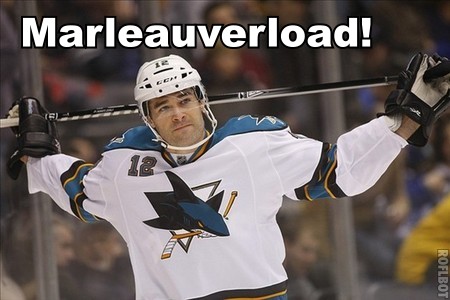 -Last month Patrick Marleau messed up while trimming his unibrow and he had three eyebrows for a week and a half.

-Roenick hates Marleau because Marleau drinks soup out of a thermos for lunch every single day.

-Marleau teared up when Joe Thornton passed him the salt the other day. It just made him nostalgic, y'know?

-"Hey Jeremy, why didn't you ever win a Cup? You had Chelios, Belfour... seems like a can't miss. What's up with that?"

-Marleau was a big proponent of the SBNation United redesign.

-Patrick Marleau constantly tried to get Jeremy Roenick to watch Veggie Tales with him on the plane.

-Marleau has two kids but has only successfully had sex 1/2 times.

-Patrick Marleau's favorite part of Las Vegas is that tram that goes from Excalibur to Mandalay Bay.

-When Marleau asked Roenick what his favorite dinosaur was and Roenick replied "pterodactyl" Marleau gave him a twenty minute lecture about how pterodactyls weren't actually dinosaurs.

-Patrick Marleau figures he has a good icebreaker if he ever meets Richard Dreyfuss.

-Patrick Marleau always sits down on moving sidewalks at the airport. He says it's "For safety."

-Patrick Marleau refuses to play Skylanders with Brent Burns because he thinks it is too violent.

-Marleau has spent his new-found free time building a Battlebot.

-Marleau sometimes sighs and wonders what Dennis LaRue is up to.

-Marleau refused to see Wreck-It Ralph because it erroneously stated that Zangief was a bad guy. "If they messed that up then who knows what else they got wrong?"

-Patrick Marleau was going to go overseas and play with Logan Couture but Logan told him there could only be one Shark on each team.

-Marleau doesn't have a fantasy football team, he just likes to hear about other people's.

-Marleau thinks the Princeton offense would be a good fit for the Sharks.

-Marleau misses a shift or two a game because he randomly gets an erection. 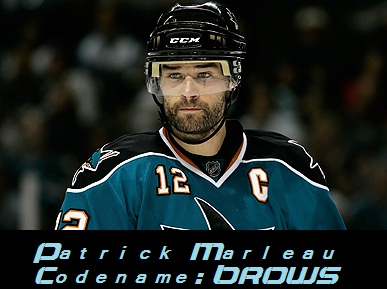 -Marleau has a twitter account, but to keep people from pestering him he tweets under the name "Judson Couture."

-Marleau was really happy when they announced the new Star Wars films because it meant he got to follow the further adventures of C-3PO.

-Marleau spent a season trying to get everyone on the team to call him Hat Trick Marleau.

-"I'm just saying, we should totally play the puck from the bench if it gets close enough."

-Marleau's number reflects the number of dates he's been on.

-Marleau didn't vote because he didn't believe he had done the research necessary to make an informed choice. Fuckin' weirdo. 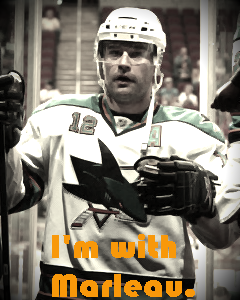 There is a tumblr that exists (please do NOT visit it, it doesn't deserve any of your hits) that basically just steals all of our Marleau Facts and posts them without any credit to Battle of California. Even worse, sometimes the person running this tumblr adds in their own Marleau Facts, and you can always tell because they're fucking horrible and not funny at all.

We are well aware that writing this post will just provide more content for this thieving cur to steal, but because we love you, our readers, so very very much we decided to go ahead and do it anyway. I hope you all appreciate it.

According to THE SITE, the Sharks lost again today, in the diseased mind of an autistic lunatic hockey fan or perhaps in a world perpendicular to ours.

Fun fact: in every single one of all the possible universes, Jeremy Roenick is an asshole. He's like the M'Kraan Crystal, only instead of a crystal he's a douchebag.