A Most Difficult Choice

What whipping boy would you want to keep in the Pacific division?

Share All sharing options for: A Most Difficult Choice

League-wide through the NHL there is a lot of unnoticed hate that takes place between our warm weather hockey brethren that makes up the Pacific division. This clearly has part to do with that these are not the biggest hockey hotbeds in North America, and that outside of us here in California (and even still it’s a small percentage of us) nobody particularly gives a damn. Yet, here we are with two teams in southern California, one in Hella-Land, one in the Dickhead State, and one complete failure in the Phoenix area. Now besides each other here in California, the teams that are most wished to have dogs shit in their skates by us here in our fair land are those of Dallas and Phoenix. With another Gary Bettman season going on instead of an NHL season, there are a lot of things up for debate between the brass and the cockles to determine, perhaps drastically, the shape of the NHL for future seasons whenever that may be. A few topics are percentages of revenue sharing going to whom, realignment, and perhaps even contraction.

It’s pretty clear that IF contraction of the NHL was to take place it would almost guarantee at least one team in the Pacific division would be axed. Clearly, the Kings are safe as they are the oldest franchise by about thirty years, and are the best damn team to ever grace the NHL. The Sharks have pretty good attendance, and routinely make the playoffs until blowing their season in an unbelievable manner at least, so I will say they are pretty safe. Sure they may have financial issues, but it’s the NHL. Who doesn’t? But especially problematic are these jagoffs causing the lockout in Disneyland, the desert, and the bigger desert (which is the only thing bigger in Texas, besides your fat asses and inflated egos). So, I raise the question: Which Pacific division teams would you contract if it had to be two of them? Pretty obviously the best thing would be for an all California division and say adios to the Dogs and Dicks. Okay, so more exact: Between the Stars and the Coyotes, which team would you keep? Here’s the arguments…

Hating the Stars is possibly the most enjoyable thing about them. It’s just so easy. Trevor Daley? Asshole. Jamie Benn? Asshole. Jaromir Jagr? Probably a Hall of Fame asshole. And they gargle sacks. The Stars do scare the crap out of everyone occasionally the past few years, strangely being in a position on top of the division for about four months, but they thankfully always proceed to fall apart and miss the playoffs. Watching any game in Dallas is also comically pathetic as their stadium is perpetually empty. Really, that’s all we can ask for when it comes to a division rival.

Unfortunately, the Stars weren’t always awful, wonderful regular season chokers. They used to make the playoffs. They even cheated and won a Cup before, denying Buffalo any sort of happiness ever. Also, they’re in Texas. That alone should be clear enough why the Stars should stop existing. Plus, they were originally in a market that used to deserve a hockey team: Minnesota. This was before Minnesota acted like lying, hypocritical sock fucking weasels, but still, having your team leave for Texas? That could piss anyone off. Lastly, Mike Ribeiro and Steve Ott, the two biggest pieces of shit to ever exist in the NHL (excluding Mr. Unnecessary-E-at-the-End-of-a-Normal-Name) are no longer in Dallas. The amount of hate for Dallas, while still stratospheric, took a sizable hit. Now they are just kind of like irrelevantly annoying. Like herpes.

The argument for keeping the Coyotes, outside of Gary Bettman trying to save face, is essentially the fact of that they aren’t Dallas. The Coyotes additionally may be the only team with worse attendance as not only is their stadium usually empty, but other teams fans often outnumber the Coyotes' (which is pretty easy to do admittedly). They have barely any success on or off the ice, hardly anyone in Arizona knows the team exists except when they are voting to deny giving them any public funding, and the Kings made them their bitch in what could be described as "art" during the 2012 Western Conference Finals. Their urban cousin, the Suns, are pretty generous as they gave L.A. their only worthwhile asset. Also, they have great boobs. 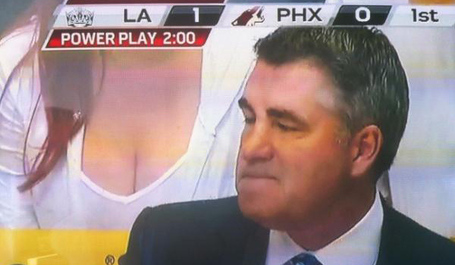 Outside of the boobs, Phoenix has no redeeming qualities. Their douche bags aren’t as enjoyably detestable at the Stars’ either. They are just horrible people. I will concede Mike Smith is a tremendous actress.

Look out Meryl Streep. As for Arizona, they are a state that in my book rivals Texas in fucktardity. Mexicans? Horrible, disgusting people that steal jobs. Being part Mexican, this offends me. Even though they have me described perfectly. MLK? Yeah, they didn't want to recognize him or his holiday. On the plus side it did give L.A. the Super Bowl. Lastly, they don’t use day light savings and this screws me up royally if I ever am unfortunate enough to have to go to Arizona.

The Kings beat the Ducks in fake ESPN land 2-1. Fake hooray! However the Kings are still in close to fake last place, but that is reserved for Anaheim still. I guess EA Sports must like the Sharks seeing as they are in first. Guess I'll stop playing FIFA then, jerks.