Time to bust out the Doty jerseys.

The Kings were originally scheduled to play at Minnesota on Saturday, but to my surprise when I tuned into the worldwide leader of sports, they already were playing them on Friday.

The Kings lost again, putting them about on par with the fake Sharks. Now here's a dilemma: I have tried desperately (aka, over five minutes) to find the god damn THE SITE yet to no avail. So I either pin my complete and total loyalty to the Kings of the wrong sport in a town where they don't really deserve even an NBA team, or...

Go with possibly the biggest Cleveland Steamer ESPN has ran outside of The Decision where Lebron James gave his rose to the Miami Heat. "What could this possibly glorious Thai food filled burrito dump be?" you may ask. Well, they basically ran my idea of just running the whole 2013 NHL season on EA's NHL 2013. I figured this was a bad decision for even me to run with here at BoC. I did. Me. I had heard ESPN was running a fake season, but the fact there are full blown segments and videos on it...It's just frankly pretty incredible. ESPN is now worse than me, and I'm sure you all thought that anything even on par with me on the horrendous meter was impossible.

The fake ESPN NHL Kings are not fairing too well there either however, with a record of 4-6-0. They did beat the fake Minnesota Wild, so, even while fake, L.A. still has the better Kings. Like that was even worth mentioning. On top of that, the ESPN Ducks are in dead last and have suffered injuries to Souray, Cogliano, and Baldy. That's some fake karma for ya, bitches. Thanks for the lockout, which really screws your team over too (more on that later). Things then got kind of weird as the Sharks in fake ESPN land are in first of the division, which of course seems to be directly conflicting with THE SITE. This can only mean that these universes are hurtling towards each other through time and space, due for a mass collision, and an out of control cross over of parallels and paradoxes not seen since the Flintstones met the Jetsons (also comparable to one episode of "LOST"). Or, that these things are all fake. You be the judge. The main point I came away with, and this is actually pretty sad, was that this fake coverage of the NHL on ESPN was far superior than how they usually do things. Not surprising though was that even a fake Penguins/Capitals game got about 90% of the airtime for the "NHL". At least up until the Winter Cash Grab getting cancelled was announced.

Something that is interesting/hilarious to consider is that if the lockout does go a full year (which almost seems inevitable now) not only will Teemu Selanne be a year closer to death (something Rudy touched on already), but Corey Perry and Ryan Getzlaf can both become Unrestricted Free Agents and can possibly never play another game as Ducks ever again. Of course this also applies to the Kings with Penner, Simon Gagne, and Rob Scuderi just to name a few, but who cares? The Ducks could lose both Perry and Getzalf to free agency without getting shit if this bumblefuck of a year perpetuated by their organization* carries on as it has been and the two of them realize they will never win squat again if they stay. Plus, chances are Bobby Ryan finally gets shipped out as well since they might as well go for full power suckitude. I hope Anaheim gets denied shared revenue too. That’s L.A.’s money you moochers. Here are some food stamps for a Colby Armstrong. It will be a fun season when the Ducks top line is Andrew Cogliano, Daniel Winnik, and Devante Smith-Pelly.

*Sure, it's probably not all the Ducks' fault, but doesn't it seem like something they would do?

And, oh yeah, The Winter Classic got cancelled. See Detroit, that's what happens when you get swept by the Giants. We just can't have nice things. Happy belated Halloween. 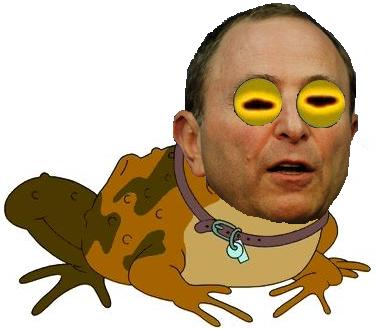 ALL GLORY TO THE HYPNOGARY