A Note to the Owners

Good thing the Kings have an owner that would never abandon them. Right, Phil? Phil? PHIL?!

Share All sharing options for: A Note to the Owners

Reality is quickly becoming my vision of what hell is like. No matter what happens, an annoying little gremlin-like nuisance continuously prevents me from watching hockey, while a bunch of pigs wearing suits, a la Animal Farm, count my money and laugh. In the process football slowly bores me with each viewing. Basketball...is still basketball. All the while more dancing around by the gremlin prevents any further advancement of getting any hockey back in my heroin withdrawal-like state. Sure, I could drive out to Ontario for a hockey and meth fix in the Inland Empire, but then I actually would be in a hell scape, and not just an imagined one. Meanwhile, I sit in a glaring fog bank and a obnoxious fog horn blares every five seconds while Ryane Clowe punches in my players' faces with no call on NHL 09. All of this could be avoided. I would ignore the fog bank, put down the controller (and gun), and get a grip on my joblessness/alcoholism/uncontrollably bad blogging. Well, maybe the last one would still be a problem, but I would have hockey to drown it out. Except that I don't.

You owners that keep Gary Bettman around, and I know you all read this, better watch yourselves. Your fan bases won't stand for another lockout and-Oh wait, yeah, I forgot. You idiots don't have fan bases for your shitty dirt eating teams, and you want more money even though you are in an nonviable market because your dipshit commissioner is the one that put you in that sad, hockey hating town. Yet you fucksticks wanted a team, and Gary complied, and now you employ him to make sure you don't keep losing cash (which is probably only a drop in the bucket anyways for you rich as fuck bastards), even though this lockout is making you reportedly (according to you guys) lose more money anyways. Well, it's making ME lose MY god damn mind, which is pretty serious because I was pretty unbalanced to begin with. And yet you were put in markets that made no sense by this jackass. It's a rather chicken/egg situation. Except that instead of being sort of a minor philosophical question, this is more akin to taking a screwdriver and plowing it up your nose to fix a headache.

So here's to you, jagoffs that are pushing this lockout. Most definitely you guys Dallas, Anaheim, NHL owned Phoenix, Columbus, Florida, and even you New Jersey. Probably also you St. Louis, Long Island, Tampa Bay, and Nashville who got here for not realizing you are to be the Oakland Athletics of hockey and don't you forget it. Hell, maybe even you, too San Jose, Carolina, Colorado, and you dumb ass hypocrites Minnesota. I hope the NHL contracts most of you morons and then thinks about adding teams to markets that actually know what the hell hockey is. Or at the very least, maybe the league won't add teams to markets that already have franchises to where both of you suffer. Maybe like Milwaukee, or Seattle, or anywhere ever in Canada (though I think it's funnier if they never get another team again. Ha ha, Canada) instead of multiple teams in Florida and the desert wasteland of America.

The Kings lost some more according to ESPN/EA Sports and are now only ahead of the should-be-contracted Ducks. The sheer fact I am still watching these "recaps" makes me almost hate myself if it wasn't for the fact I was pretty awesome already.

Also, I'm just gonna recycle one of my earlier images. 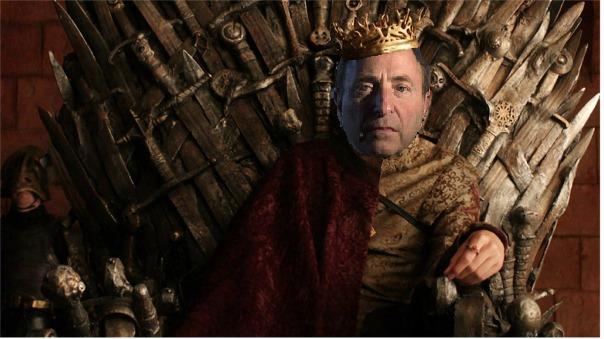 Pretty sure, this is the only way to make Joffrey more detestable.