There's something weird going on with the NHL website's poll writer.

I don't follow NHL.com too closely, as there are countless better websites for following hockey news (such as this one here at Battle of California, a community built, ‘facts only’ website). But I do know that NHL's official website routinely runs "fan polls" on their front page.

NHL.com's fan polls are generally uninteresting. However, lately something strange has been happening with their polls. First, it became quite clear that, as a result of the lockout, they really started digging to the bottom of the barrel for material and poll topics. Such as... 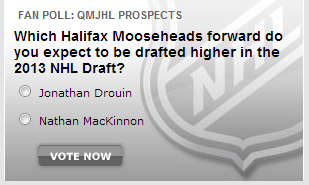 But I suppose that this type of thing is to be expected, as what else is there to discuss right now? After seeing this, however, I started paying attention to the polls a little more carefully, wanting to find out what other material they could stretch out of the slow news of this lockout.

In between the typical and mundane polls, I started seeing more interesting polls. Nothing at all what you would expect from the website of a multibillion dollar organization trying to maintain a professional image.

Luckily I captured the images and am generous enough to share them with you. 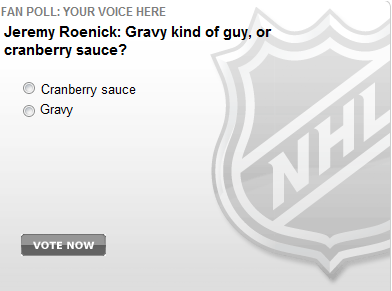 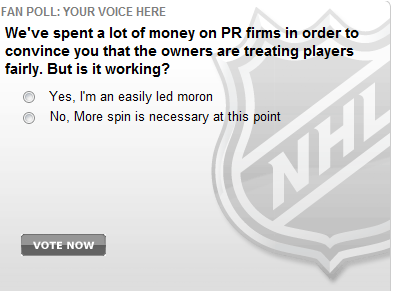 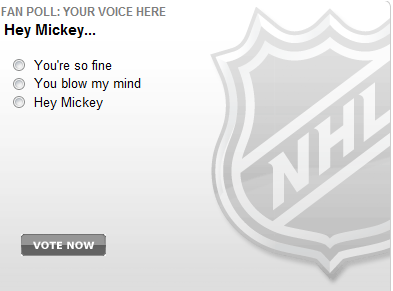 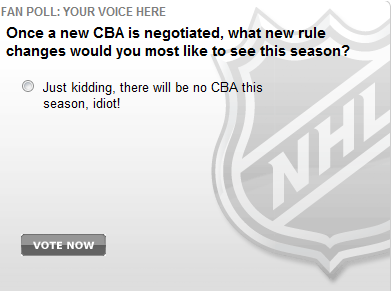 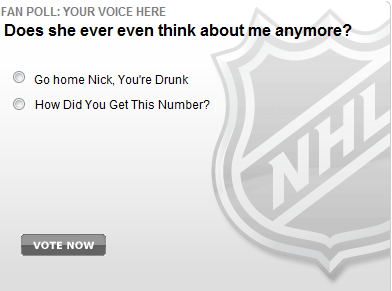 Were these polls the work of an individual certain that he had lost his audience? Perhaps merely a joke he was trying to slip by the higher-ups? Or simply the signs of a descent into madness? I'm not sure what the answer is, but for this guy's sake, let's hope this lockout doesn't drag out too much longer.