In an odd attempt to get some mas deportes in my life, I decided to venture on out to the Stapler one evening to get some ethnic flair. Growing up in Orange County I was shocked to see non-white people finally, since at Kings’ games, well, you probably know. It just tends to look like a republican convention. STAPLES was pretty lively and I was stunned to see the ice girls dancing around and not cleaning the ice, and more bizarre was that there was no ice at all in the arena. What was their purpose if not to clean playing surfaces? There was also a DJ, which I still seriously don't understand. This isn’t a damn club, it’s an arena. Or was it? It would explain these dancing chicks. But if it was, how the hell did I get in? My face was covered in paint splotches from huffing and I reeked of vomit. So many questions already.

As I took my seat, I was prepared to start trying to learn about this crazy new urban sport featuring giants and-wait a second. Where the hell is Kobe? What the hell? Blake Griffin? AH SHIT THIS IS THE CLIPPERS. The night had already turned for the worse. The other team was Cleveland who is sort of like Columbus, so there were some parallels to draw from at least. I assumed they were led by Luke Walton because he was somebody I had heard of, and was white. That's how most things work I'm pretty sure. Perhaps he was the coach because he never got off of the bench.

The Clippers scored a bunch early on, and I quickly realized scoring three times in under a few minutes happens outside of game six of the Stanley Cup Finals pretty regularly in this sport. I was told to sit down and stop making a scene after Chris Paul walked a goal in. Or basket. Whatever. Towel waving and chanting "YOU SUCK" appeared to be frowned upon when a game is only four minutes in or so. A siren seemed appropriate however after each point was made, but again apparently this was wrong, and my air horn was quickly confiscated by a red jacket wearing fascist. Griffin appeared to be lagging behind. I screamed for a line change. These idiots on the sidelines weren't even wearing their proper jerseys, but instead looked like unemployed hockey bloggers that sit around all day wearing sweats. There was a goaltending call, and I don’t even know why that exists. I got up to leave with two minutes to go in the first period. David Courtney was there at least, but even he seemed depressed. The typical classic and alternative rock music was replaced by rhythmic rhyming like if you sped up a Dr. Seuss book. Scoring felt meaningless. Players flopped like San Jose Quakes’ forwards.

Then something magical happened. It looked like a one-timer, except aerial. And not in the Kopitar flip pass kind of way. The ball went towards the basket thing, and up jumped the guy from the KIA commercials. He caught it in midair, and stuffed the ball in the hoop on his way down like I stuff Doritos Locos tacos in my mouth. The place erupted. I was in awe. "Hello good sir!" I shout to the urban patron sitting near me. "This occurrence was majestic. For how often does this transpire?"

"Maybe one or two times a game," he replied. That cannot be right. Even the crappiest of NHL goals elicit similar responses. And those happen three to four times a game from one team, and are far more meaningful. "Perhaps the local participants are less adequate at performing such displays…"

"Nah man, this is Lob City. It’s a regular thing," I am told. Maybe Lob City actually means "Look! Occasional beauty! City". This simply cannot be. ESPN shows similar plays all the time in between talking about the top high school football prospects and Alex Rodriguez’s crippling cases of venereal diseases. I finally make my exit for good.

Speaking of ESPN, the new bunch of "NHL" games has been "played". One thing that is pretty accurate is the Kings looking god awful against god awful teams. A 6-0 loss to Columbus and a loss to the Islanders? Oh yeah, that sounds like regular season Kings. Hopefully they step things up and make the playoffs only to cause a fake ESPN NHL lockout because they broke their tiny little fantasy universe by beating the fake shit out of the rest of the fake league. The ESPN fake Ducks are still in dead last. Interesting to note though, they still do have Dan Ellis in their universe.

Hockey may be coming back, but at a snail’s pace. 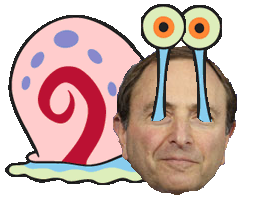 And that's how you use MS Paint.