A look back at the glorious 2011 playoff series between the Sharks and the Red Wings.

(Another weekend that is supposed to have two Sharks games instead has none, so instead of doing two new posts I'm writing one that is just recycling old stuff. Leave me alone, I'm bitter. As if the lockout isn't bad enough, some asshole stole Medieval Times from me in Ingress!)

One of the most exciting times in recent Sharks history was the 2011 series between San Jose and Detroit. The previous year, the Sharks had beaten the Red Wings in a series victory that many hailed as symbolic of the changing of the guard in terms of dominant Western Conference powers. A year later, the Red Wings were looking to prove that they weren't obsolete yet.

The Sharks stunned everyone, including themselves, by winning the first three games. Then the Red Wings won the next three, and I almost died.

Here is a look back at the pre-series previews I wrote for the series, and the gameday posts I wrote as the almost-lethally-exciting series unfolded.

Pre-series 1: Predicting who will win the series through a competition for most-interesting player Wikipedia pages.

Joe Pavelski co-owns the Janesville Jets NAHL team. Last year in the playoffs he had three straight multi-goal games, becoming the first player to do so since Mario Lemieux in 1992. He won a silver medal for the USA at the 2010 Olympics and was nicknamed "Swiss Army Knife" by the team's GM, which really isn't a very good nickname at all considering the Swiss had their own team, but whatever.

Zetterberg's nickname is "Zäta." When he played in the Swedish leagues he was nicknamed "Zetty the Grizzly Teddy." Wikipedia says this nickname was due to Zetterberg's facial hair, but that sounds suspiciously like a cover-story to me.

Game one: The conclusion to the Wiki series, looking at defense and goalies.

The only interesting thing about Wallin on his Wiki page is his old Hurricanes nickname, "The Secret Weapon," which he got due to his rare but critical offensive contributions. I'm not supposed to get into analysis here so all I'll say about that is that he's definitely been consistent about the whole "secret" part during his time with the Sharks, keeping his skills completely hidden from the opposition, his own team, and the fans.

Game three: After winning the first two games, I respond to some racist comments from Mike Babcock by theorizing that the reason the Red Wings can't beat the Sharks was because the Red Wings were one of the most European teams in the league and the Sharks were the least European.

If you really liked the old All-Star format where players were separated based on their nationality, but always wished that there was actually hitting and defense in the games and that the players actually cared who won, then this series is perfect for you.

Game four: the Sharks had a chance to actually sweep the Red Wings! I wrote about how the Sharks have failed to achieve that "prestige" at the end of the magic trick that can really get people to take notice. The sweep didn't happen, but this post did include the proper ranking of Christopher Nolan's films in order of awesomeness:

I think The Dark Knight Rises would go between Inception and Batman Begins. Agree/Disagree?

Game five: after the Red Wings avoided the sweep, I tried to get some Deadwood mojo going. Like the YouTube video that accompanies the post, the mojo failed to work.

4. If possible, run Nicklas Lidstrom over with an ice cream truck.

Game six: As the Sharks continue to try and eliminate the Red Wings, I wrote a post themed around Groundhog Day.

Well, it's Red Wings Elimination Day... again... and that must mean that we're up here at Joe Louis Arena waiting for the drop of the puck, so we can find out just how much more of this series we can expect.

Going into game seven: the pressure broke my brain. Luckily, my cat Chandler helped me write this post. 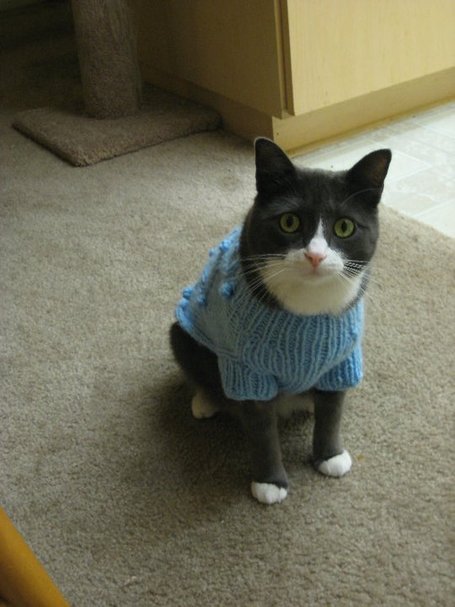 And the Sharks beat the Red Wings, all thanks to Chandler.

I miss hockey so much.