A Turn for the Worse

If you haven't noticed, BoC has nothing to talk about.

Share All sharing options for: A Turn for the Worse

For those who thought I was joking: I don't joke. Ever. You may thought it wouldn't happen. But it did. And here it is. The ultimate in non-NHL related activities. Sorry Meg, but Engrossed or whatever that fancy phone game is can only be relegated to cupping the balls of greatness.

This lockout has driven me to insane lengths. I curse the NHL in my sleep, smoke more crack then I used to, and even read articles on Yahoo! Sports. It's not pretty, folks. Things here at ol' BoC haven't been rosy either with Jer's impending prison sentence, Earl going into withdrawals from a lack of NHL stats, and Meg is just straight up losing his mind. Thankfully, we have Rudy to keep things in perspective. I, on the other hand, have been your source for all things anger related. Even still, that is beginning to dwindle as the curse of the Bettman: An Unexpected Lockout, continues on to week...whatever. What I'm trying to say is that my already low bar of blogging and bizarre "sense of humor" is deteriorating faster than my memory of what NHL hockey looks like.

But lo and behold, ye readers. For our lord and savior, the Doritos Locos Taco, has brought us yet another gift in this time of reflection on the birth of our tasty, nutritious taco god: My old Nintendo 64. Cue the angels and the singing and the showering of funky gifts. NHL Blades of Steel: 98, Ken Griffey Jr. Baseball, and the Legend of Zelda: Ocarina of Time. All here. But the greatest of all was still placed in the manger of our baby god: Mario Kart 64. It's. Fucking. On.

I won. Naturally. Plus I killed all of my foes around me. Yoshi? Gets a banana and the edge of the jump. Donkey Kong? Lightning time, fatty. Peach? Shell to the face. Sit the fuck down and take in my awesomeness. Toad was a resilient little bastard and was up my ass around the final turn however. This will need to be addressed in future contests. Additionally, despite getting ran over and failing at being a likable character, Donkey Kong still finished third. This is going to be a pain in the balls, clearly. No real hoodwinks to mention though, besides three god damn green shells bouncing around in the last bend of the course. That should never happen. Still, I was unfazed because my lord had my back.

If you are not familiar with Mario Kart 64 (in which case I feel bad for you, you sad, pathetic, childhoodless husk of a person) Sherbet Land as a racetrack is frowned upon by environmentalists. It's a big glacier where Sidney Crosby, Evgeni Malkin, and company slide around playing tummy sticks with each other. While I was racing, these stupid penguins managed to touch me inappropriately resulting in a spin out and an accompanying equally inappropriate sound effect. Peach also got revenge on me for last race and decked me while she had a star. So at the start of the final lap I was in 7th. But the taco god knows who his children are and gave me strength. I ran Toad of the road in what can only be described as "orgasmic pure beauty" (told you I would address that) and I began my climb back. One star later and I had crushed Peach for her insolence and secured a pathetic third place. Yoshi won and Donkey Kong finished second, bringing up the least likable one-two finish since the 2004 election. This race was a load of shit from the get go. Getting blasted by a penguin, smacked by a star, and then again by a penguin in under five seconds? Hoodwinkery at its finest.

Awesome Calculator: Pretty good for crushing Toad out of mid-air

The taco god giveth, the taco god taketh away. I spun out without any provocation on the first lap and dropped to 7th yet again. Fortunately, this course is a marathon and after red shell blasting my opponents until I was back in the lead I repaid Donkey Kong with a bomb shoved so far up his hairy ass he was going be shitting the Gaza Strip for the next three days. Well, then the same random spin out of nothing being near me struck again and I fell of the damn track. Am I driving on Firestones? Is Danica Patrick my coach? She can't be. I still won. I should upload videos of me racing and send them to her for inspiration and guidance. Admittedly, I did only win by virtue of the fact I only fell to third after that second wipe out and received a gift of a spiny shell from our Father Taco. I remember being better at this game when I was 12. That, or my system is hellbent on revenge from the 15 something years of abuse I have dealt it. It's not my fault the AI serves up fastballs to Mike Piazza when I play Ken Griffey Jr.'s Baseball.

Awesome Calculator: I won, so, high

Bullshitometer: Off the damn charts due to a very bitter machine

In my opinion, this is the toughest course in the game. All turns are at incredibly sharp angles, there's a surprisingly high rate of falling, and these annoying Thwomps (big cube like blue things with faces for those not familiar with fun) fall out of the sky to ruin your day like a bomb in 1940s Japan. This course also made me renounce the Doritos Locos Taco god for good. After running Yoshi off the road on the final lap I was neck and neck with Donkey Kong. Homeboy was right next to me when I pulled out 3 green shells to where his necktie wearing ass-hat should have been blown back to Africa (not racist). 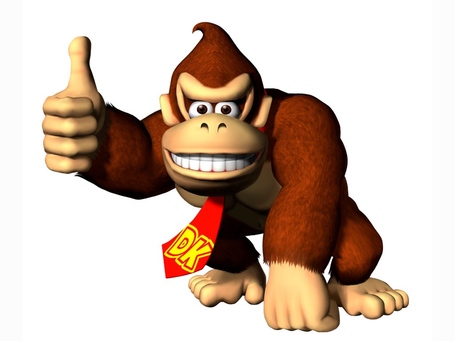 Instead, he went through each shell as he drove right next to me. I promptly launched all firepower at him like I was the Battlestar Galactica (anyone?) and two connected. He bounced, wept, and soiled himself all while crashing over the finish line for first. If I ever see Jane Goodall I am going to punch her in the face. Fortunately, I still won the overall tournament, but then my Nintendo froze on the winner's ceremony and I didn't get to properly relish in my glory.

Awesome Calculator: If you can guess who I was, then I will momentarily say YOU are awesome

Notes: You may be saying, "Hey Dunn, first off, you suck! Secondly, that picture is clearly Mario Kart Wii while you said you were playing Mario Kart 64. Are you as dumb as an NHL team owner?"

The answer is fuck you.

You also may claim, "Well hey, ass clown! There's no bombs in the 64 version either! You're a liar! Just like NHL team owners!"

There are bombs, but they are booby-traps (heh) disguised as items. You will just have to take my word on it that I shoved one of these up Donkey Kong's ass.