We need someone to blame, and I have just the goat for the job.

The lockout continues. Who is responsible for this mess?

Seriously - who do we blame?

Should we blame the owners? They have a lot to do with our current situation, so yeah.

Should we blame Gary Bettman? Well he certainly plays a role.

Should we blame Jeremy Jacobs, owner of the Bruins? Yes, to a large extent, we should.

Should we blame men? Maybe, but you're going to want to tread carefully there, or it might blow up in your face.

Should we blame Obama? Why not? He's used to getting blamed for shit that isn't his fault.

Should we blame this goat: 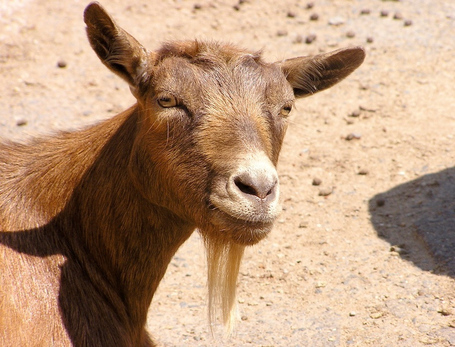 Yes. Yes we should. It's all his fault, you guys.

I hate him so much.

Come on, everybody, join in! Take all your anger, all you frustration, and all your desire to scream insults and lash out at the world...and direct it towards this goat.

He totally deserves it.

I heard that the owners sent the players a really reasonable proposal to end the lockout last week, but they wrote their proposal down on a piece of paper and gave it to this goat and instead of delivering it like he was supposed to the goat ate the paper! Can you believe that?