You stupid assholes. You couldn't even have a decent retort for why the last proposal from the players was bad, or a counter-proposal. That isn't negotiating. That's called you being grade A dongsicles. You left a fucking voicemail.

"Oh hey guys. It's me, Daly. Just wanted to say hi and fuck you and your dogs you stupid jock sonsofbitches!"

I'm pretty sure that's accurate. Oh, but four owners came out to say the players weren't negotiating and the whole progress of the talks was ruined. Yeah, except the last proposal had more concessions from the players' side, which is ridiculous to begin with when the league was making record revenues and the only side giving anything up to begin with was the players. Key word there is "was" because nobody is going to show back up with this sort of crap going on time after time. Plus, the players seem to be doing alright in Europe and Russia and wherever the fuck else they went. Liquor stores? Probably. I spend most of my time there nowadays.

So what if the players' offer was non-negotiable? Did it hurt your feelings because it didn't say, "Hey boss, you were right. We actually do the work while you handle the money, but you know what? Take fifty percent of what I already have guaranteed. And after that, feel free to have sex with my wife."

Just take the players' cash that they are offering to give up, accept the contract term limits they are conceding that YOU morons need for yourselves even though you are signing off on those with your GMs YOU hired, and lastly eight years or ten years? Who gives a shit, you'll lock players out whenever the next CBA expires for some lame ass dickheaded reason. Probably because dental plans are too expensive now. And what do you propose next? Another break. Eat shit and die. 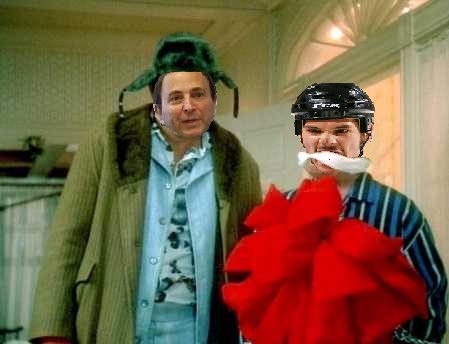 The worst one yet because I'm too jacked up with rage and PCP. Happy fucking holidays.