Dallas Stars (celestial) at Anaheim Ducks (terrestrial) 7:30 pm
Defending Big D and Anaheim Calling -- sometimes you have to lose the Battlestar in order to win the Star War.

Today's cartoon doesn't make the most obvious sense, but whatever -- in a bit of a rush this morning. 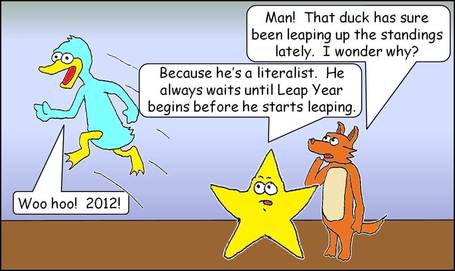 Leap on, you feathered fowl!

Twelve games into 2012, and the Ducks have scored 41 goals and allowed only 21 -- a huge leap forward indeed. For comparison, in the last twelve games of 2011, the Ducks allowed 42 goals -- exactly twice as many. Wow.

But even with the leaps forward in winning, Ducks haven't leapfrogged many teams in the standings yet -- just two points past the Oilers, now tied in points with the last-in-the-east Hurricanes, and still deeply embedded in the 13th spot in the west. Even with the shocking turnaround in results, it's a slow climb indeed.

Oh well, whatever -- regardless of standings implications, winning is still pretty fun to watch. Keep it up, Ducks!

Prediction: I should be around for game comments tonight -- the more the merrier. Ducks keep leaping, thanks to some net-front heroics from Perry.