Ducks Gameday -- Another chance to lose to the Jackets!

Share All sharing options for: Ducks Gameday -- Another chance to lose to the Jackets!

Anaheim Ducks (Fail for Mikhail) at Columbus Blue Jackets (Fail for Nail), 3 pm
Anaheim Calling and The Cannon -- also Meg and Rudy both have gameday posts below.

A comprehensive list of opponents that the Blue Jackets have defeated twice this season: 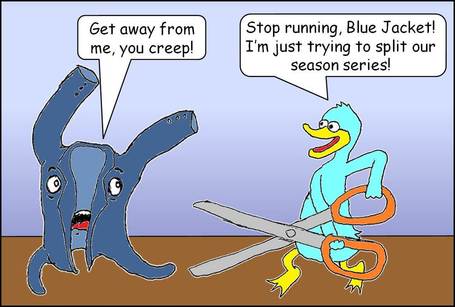 Not the strongest, but I've had Columbus use that line before... :)

Of course, this struggle isn't really new -- Ducks have seemingly always have had trouble with the pesky Blue Jackets. Anaheim has dropped two games to Columbus this season, two games last season, and three the year before. So sure, this seems like a big dropoff -- last game visiting the best team in the league to today visiting the worst team -- but our odds of losing are still pretty substantial, I'd say.

Especially if Getzlaf's still a passenger -- motivate him, Rat!

Prediction: I'll be around for game comments this afternoon -- stop on by. Ducks go to overtime for the fifth straight game, then probably blow it.