Share All sharing options for: Ducks Gameday -- The Outshooting Ducks?

Anaheim Ducks (13th in west) at Minnesota Wild (12th in west), 4:30 pm
Anaheim Calling and Hockey Wilderness -- are you a Saku or a Mikko?

Here's a statistic that totally caught me off-guard. Did you know that the Anaheim Ducks have outshot each of their last eight opponents?

Now that may not seem like the most noteworthy statistic to fans of other teams, especially with the Ducks scoring and allowing 19 goals over the stretch, but bear in mind who we're talking about here:

Basically, ever since they lost the ability to play Niedermayer and Pronger, the Anaheim Ducks have been bleeding shots-against -- until now, perhaps?

Now I should put in the obvious caveat -- you can't tell who won a game just by knowing the shots-on-goal count. It's goals that create wins, and the Ducks did create their share of goals (and had a fair amount of wins) over the past two-and-a-half seasons despite a regular shot disparity. Still, shooting totals do reveal some things about teams' playing styles -- they to some degree reflect things like time-of-possession and offensive zone time, areas the Ducks have struggled in post-Niederpronger.

But now, perhaps, under Coach Kirby (that's Boudreau's nickname, newcomers), it seems that Anaheim's players are starting to adjust to a new style -- wingers come lower in the defensive zone, leading to better transitions, for one -- and it's starting to show its way onto the shot total sheet. Of course, it's not a huge sample, and it does include Columbus twice and Carolina once, but it's still an 8-game stretch where opponents are averaging less than 25 shots per game.

We shall see if this trend can continue, especially as the Ducks trudge through this grueling 8-game road trip, but if this sample is a sign of things to come, good news for Jonas Hiller -- that guy's had a tough gig the last few years for sure.

Oh shit, it's Valentine's Day -- anybody still scrambling for a last-minute gift for that hockey-loving sweetheart?

Well here -- I wrote this love poem a few years ago back at AOL Fanhouse and it's still pretty perfect. Feel free to re-package and present it as your own. :) 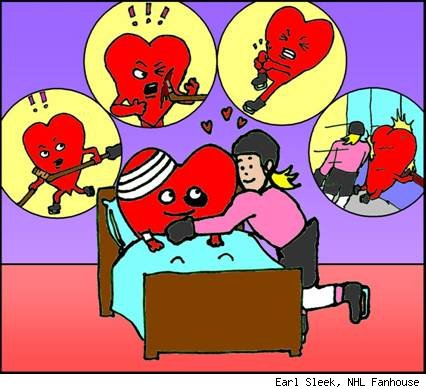 When we first met, my dear, you gave me that look,
And from that first moment, my poor heart was hooked,
I thought it would pass, but that wasn't the case,
You cut into my heart with a high-stick to its face.

So now my poor heart sits on Injured Reserve,
With concussions and injuries it hardly deserves,
Its career might be over, but I still have to mention,
I'll love you, my dear, for your entire suspension.