Ducks Gameday -- Gotta keep the Devils down in the hole.

Share All sharing options for: Ducks Gameday -- Gotta keep the Devils down in the hole.

The Anaheim Ducks have sort of brought themselves within sight of the western conference playoff picture with a pair of back-to-back wins in Minnesota and Pittsburgh (strategy: allow the first goal before taking a shot-on-net, then slowly fix things before time expires). But despite the impressive run the Ducks are on, there's still not much margin for error -- see last year's New Jersey Devils as an example of that: 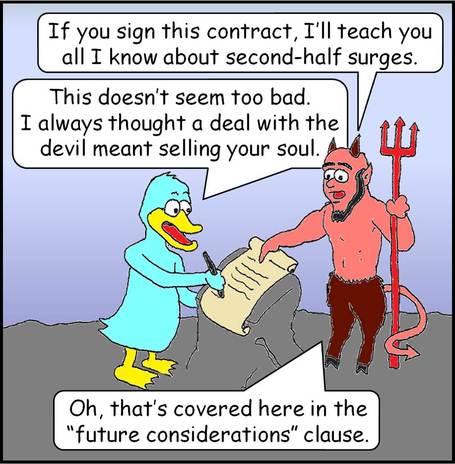 After the jump, a comparison between Anaheim's current season and New Jersey's 2nd-half surge from last year.

This chart shows the standings points accumulated through 57 games for last season's Devils and this season's Ducks -- I've noted where coaching changes occurred and when 2nd-half surges began. 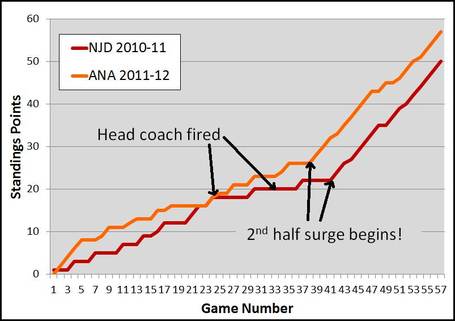 In both instances, there's a really awful start to the season, then a coaching change that's followed by a bit more mediocrity, then a turning point -- both teams turn into 2nd-half superstars. Here's the narratives:

Now the Devils did falter a bit at the end -- they went 5-7-1 over their last 13, but that didn't end up mattering too much. They finished the season a full 12 points back of 8th place, meaning they really needed to finish something like 12-1-0. Despite their amazing 2nd-half run, they still had basically zero margin for error.

We shall see how far the Ducks can take this run, but they do have a better starting point than the Devils did -- 12 games below .500 is better than 19 games below .500, plus Anaheim's surge started three games earlier in the season than New Jersey's did. Anaheim is at .500 now at game #57; New Jersey didn't get back to .500 until game #68.

But still, New Jersey offers a pretty important lesson: you can kick a lot of ass over the 2nd half of the season and still fall short. As much as the Ducks "did this last year", there's still five teams to pass in the west and not a whole lot of season left to do it.

Sometimes you just gotta roll that hard six, I guess.

Prediction: I'll be around for game comments today -- stop on by. Ducks keep surging 4-2. Goals by Cogliano, B-Ry, Sbisa, and a douche trick for Perry.