Sharks Gameday: What is Luck? Part 3

Share All sharing options for: Sharks Gameday: What is Luck? Part 3

These are crazy times for the Sharks. Where can we turn?

The Gods of the Ancient Greeks have failed us.

Who can help us? 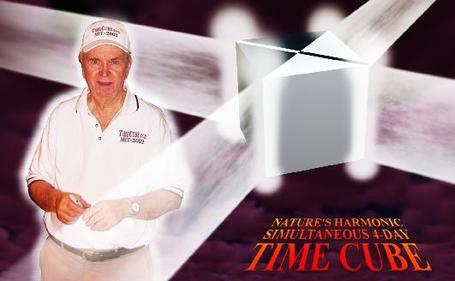 Of course! Gene Ray, Earth's Wisest Human and the genius behind the Time Cube theory!

Like I said, these are crazy times. Who better to provide guidance than a man who eats, breathes, and speaks crazy 96 hours a day?

What does Gene Ray believe?

Okay, I'll do my best to summarize (or I'll just use Wikipedia's summary):

When the Sun shines upon Earth, 2 – major Time points are created on opposite sides of Earth – known as Midday and Midnight. Where the 2 major Time forces join, synergy creates 2 new minor Time points we recognize as Sunup and Sundown. The 4-equidistant Time points can be considered as Time Square[4] imprinted upon the circle of Earth. In a single rotation of the Earth sphere, each Time corner point rotates through the other 3-corner Time points, thus creating 16 corners, 96 hours and 4-simultaneous 24 hour Days within a single rotation of Earth – equated to a Higher Order of Life Time Cube.

So you see it's really quite simple.

I've spent more time than any rational person should reading timecube.com, and if crazy is even a little bit contagious then I'm doomed for sure. Even with all these wasted hours, however, I still have no idea exactly what Mr. Ray, the President of Time, is trying to tell me with these 8,058 multi-colored words.

With my poor simple retarded false dog brain, I will attempt to identify the four most important ideas of Mr. Ray's manifesto:

#1 If you divided the surface of the Earth into four quarters then you could say that each quarter experiences its own individual day and night during one rotation of the Earth.

#2 You could say (if you were crazy) that these four different quarters having their own individual days means that there are really four "days" inside each individual traditional day.

#3 Therefore God does not exist. Neither does the number one.

#4 All of this makes Gene Ray very angry.

What does Gene Ray believe about luck?

Amazingly, Gene Ray only brings up "luck" once in his entire manifesto:

Dr. Ray talks about "creation" a lot during his colorful ramblings, and here he seems to be arguing that everything in the universe sort of "cancels out" or something. For every thing there is an opposite, and this includes physical things like hemispheres and races (what's the opposite of a Chinese guy?) to non-physical things like luck and perspectives.

So what Professor Ray is saying, I think (maybe) is that for every bit of good luck that anyone experiences there is a corresponding bit of bad luck that also exists, and that either that same person or someone else (I'm not sure which) will experience.

How can we apply these beliefs to hockey?

Well if I'm right about what Gene Ray, Esq. is saying about luck, then his views actually mesh pretty well with competitive sports. Any "good luck" that one team has is also "bad luck" for the other team. So, for example, if during a shootout the puck bounces and prevents the shooter from taking a quality shot, that's bad luck for him and good luck for the goalie.

I'm still unclear if Ray-man also believes that good and bad luck will even out for an individual team over time. Your guess is as good as mine.

Well Gene, do you have any advice for the Sharks?

My Cubic Wisdom debunks 1 sex gods.
The male god singularity and same sex
trinity equates denouncing motherhood
and supporting a state of queers - with
a price of HIV devastating life on Earth.

You heard the man, Sharks. Now get out there and make it happen!

After Tuesday's rock-bottom performance against the Blue Jackets, speculation about a big trade for the Sharks reached a new height. I'm not in favor of most of the realistic proposals that have been discussed, so it was reassuring to read the following quote from Sharks GM Doug Wilson:

“In the big picture,” Wilson said, “one or two games is not going to impact any decisions we make.”

The Sharks have a good roster but, as Wilson says in another part of that same interview, they just aren't playing up to their "capabilities" right now. Injuries and bad luck have knocked the season off the rails, but there is still enough time to get everything under control once again. Earlier this season I wasn't too happy, looking ahead, at how busy the month of March is for the Sharks. Now, though, that might be exactly what the team needs. They need to go out and play, without time to dwell on losses that should be quickly forgotten.

As true today as when it was first written.

Prediction: Sharks win three out of the four simultaneous games against the Maple Leafs, with scores of 2-1, 4-2, and 5-3.

Today's movie is Groundhog Day, which I actually wrote about during the Sharks-Wings playoffs series last year. Go read that.