Share All sharing options for: Ducks Gameday -- Look Out, Luc!

I don't know if it's happening today, or tomorrow, or some game after that, but some pretty big milestones are coming for Anaheim's favorite Finn: 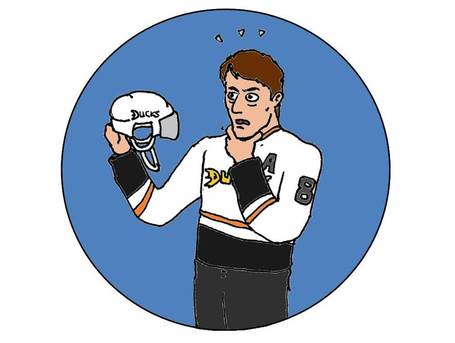 Not only would Teemu's next point put him alongside Lucky Luc in the top 20 scorers of all time, but pretty soon he'll be moving past his countryman Jari Kurri as well.

Forget Linsanity -- this is Finnsanity!

Now I know this is probably not terribly thrilling for Kings' fans, and rightfully so -- Robitaille and Kurri have incredible legacies with Los Angeles (yes I know Kurri played a year in Anaheim; that's not what I mean), and it's naturally not going to feel good to see a Ducks living legend pass both of them. But this isn't just your typical Ducks scumbag -- it's Teemu. The Finnish Flash with awesomeness to spare.

So congratulations, Teemu -- you're constantly incredible. But also, congratulations again to Luc and Jari -- you guys were just as awesome. Southern California has been blessed with some of the game's finest scorers and ambassadors over its hockey history, and Teemu's climb up the scoring charts offers us a reminder of just how lucky we SoCal fans have been.

This isn't for any real purpose, but I did want to take an eyeball-glance at the scoring spans of Robitaille and Selanne -- where in their careers did they pick up all these points?

Age-wise, Teemu started playing in the league two years older than Robitaille, which put him well behind Luc's points totals, but Selanne's continued point production after age 35 has made up for that. Here's the data in table form:

You can see the NHL lockout occurred when Robitaille was 38 and Selanne was 34, and in both cases, it seems like it was well-timed for both players, at least in that the lockout took place one year removed from each scorer's least productive season of his career.

At any rate, great careers, both of you. Thanks a billion.

Prediction: I should be around for game comments today -- stop on by! Ducks 3, Hawks 2. Teemu scores one historic point, a goal with the man-advantage, which also puts him one behind Luc Robitaille for career power play goals.