Forget the post title pun -- I'd just better hurry up and post this thing before the network crashes again. 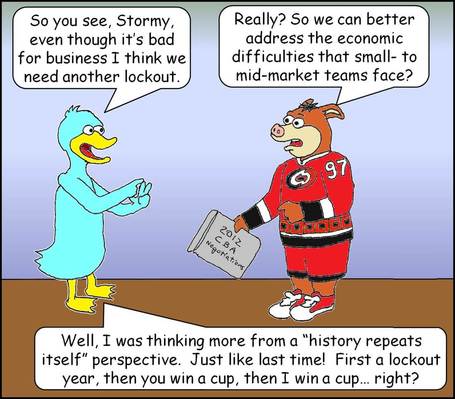 Stormy is easier to draw than a personified hurricane. :)

Who knows if the NHL is really headed towards lockout-ville again next season? I can't rightly say, but at least the possibility is open -- may as well cartoon about it while I can.

After the jump, an actual NHL team employee writes me an e-mail (and it's not a cease-and-desist letter)!

An invitation from the Phoenix Coyotes:

I wanted to reach out to you since you are Die hard hockey fans, about making a trip out here to the desert to see some hockey. We have the Sharks here twice and the Ducks once in March and wanted to see if you were interested in setting something up. What we can do is A. pick one of the games, market it to everyone, get a feel for the number of seats and make plans that way. OR we can have a link made up for both games in March, market on a more individual basis and whoever wants to come this way can take care of it on their own. Here is what the Anaheim Ducks have put together with us, if you’d like to get an idea of what we can do.

Saturday, March 31 through Sunday, April 1
Die Hards road trip to Phoenix for Ducks vs. Coyotes
Bus trip from Honda Center to Jobbing.com Arena and a one night’s stay in a hotel near the arena.
This is a great opportunity for Die Hards members to get together to support our team in Phoenix. We have developed a reasonable travel package that includes transportation, hotel stay, tickets to the game, a social event with the Coyotes Booster Club, autographed merchandise raffles, and much more.
CLICK HERE TO RSVP

All jokes aside, that's pretty cool of them. The cost of the link above is as follows: $179 per person if 2 people staying in a room; $239 per person if 1 person is staying in a room. The pricing appears open to anybody, so I won't be doing anything on the Ducks end (besides, I can't make that date) -- if any Anaheim fans are interested in going, just click on the link above.

As for the Sharks, hopefully this e-mail went out to Fear The Fin also -- San Jose visits Jobing Arena on Saturday, March 10, and Thursday, March 29. If any Sharks fans want to arrange some sort of road trip for either of those games, let me know and I'll send it along.

Likely, I'm just going to send a "thanks for thinking of us" e-mail, but hey -- it's cool that we made some team's radar, even if they are grossly over-estimating my ability to motivate people. :)

Prediction: I'll be around for game comments tonight, network willing. Could be a fun game, with both teams being so awful and all -- Ducks 5, Canes 4, OT. Fail For Nail hits a snag for both teams.