The fuck is this shit? The weird thing is that you can still hit a volleyball around (you know, the smooth round ball that no one fucking knows how to hit correctly) but apparently footballs are off-limits. I am outraged. Now I know how Lincoln felt when he was a slave.

Rangers, Devils remind us why NHL coaches’challenges are a necessity

I'm honestly baffled why people think coaches' challenges are a good idea. They have them in football because there are a lot more challengeable plays (ball spots, in/out of bounds, crossing the plane, etc.) but hockey really only has 5-6 plays a game that require review. I don't personally think goaltender interference should be reviewable* but if you think it is, why not, you know, just review it? How does it make sense to say, "We need these goals to count!" and then turn around and say, "Sorry, Torts, but you used a timeout when your 4th line iced the puck so now you don't get to review that goal." Review it or don't,but leave stupid shit like coaches' challenges out of it.

*The problem with reviewing goaltender interference is that it's incredibly subjective. Did the guy hit the goalie, was he pushed in, did the goalie flop (and if he did was there still interference), did the goalie have time to get back up, had the team been warned already about hitting the goalie, had the goalie already been warned about initiating contact, all that shit has to be taken into account. If the ref on the ice had the ability to review the play himself it might be OK, but if you sent it to Toronto they wouldn't know what to do with it. 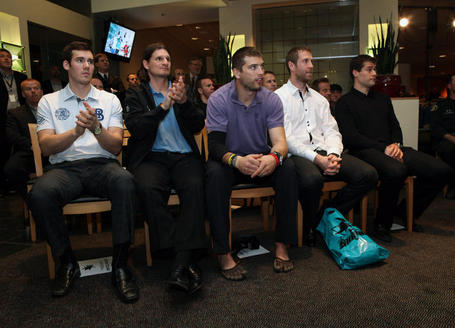 This was posted in the comments of Meg's post from 2 days ago but I'm re-posting it because bwahahahaha look at Patrick Marleau.

Prediction: Kings win, 3-2. Mike Richards fights Sean Bergenheim, gets concussed again. On the plus side, he'll be able to enjoy internet memes again.