Ducks Gameday -- When you wish upon the Stars...

Share All sharing options for: Ducks Gameday -- When you wish upon the Stars...

Cartoon archives, what have you got for me today? 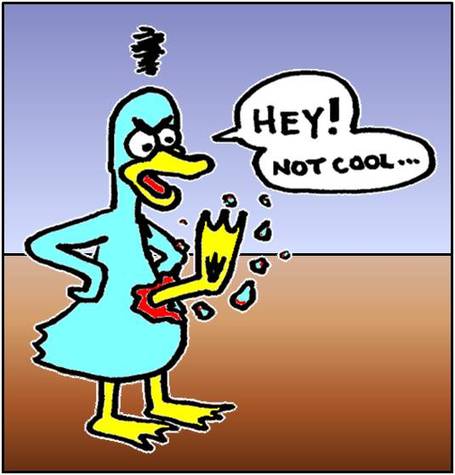 As of this morning, Sports Club Stats has the following 50/50 method playoff likelihoods for the BoC teams:

So keep some hope, Ducks fans! Anaheim is fucked, but there's nearly a 1 in 4 chance that there won't be anybody in this state to gloat about it this summer. C'mon, Ducks and/or Avs and/or Flames! :)

I was going to write a post about the Ducks' upcoming summer roster decisions, but I'll save most of the writing part of that post for later -- instead, here's just a snapshot of the NHL salaries the Ducks are carrying into next season, courtesy of CapGeek. For Anaheim, the "CASH" column matters more than the "CAP" column, since they won't be spending to the cap ceiling.

So there's not nearly enough forwards signed, but there's already a top line and a third line, plus nearly an entire blueline and goalie tandem. And here's a look at the expiring contracts Anaheim is shedding -- everybody except Nick Bonino is unrestricted. I've listed and sorted according to what they made this season:

* Anaheim paid only half Hagman's salary because he was claimed on recall waivers.

Now there's a huge amount of uncertainty about the near future, as there is no Collective Bargaining Agreement beyond this year and many are thinking there will be a salary rollback before next season starts. As such, I'd probably be reluctant to spend too much more money before there's more clarity as to what is already committed to.

That's enough for Saturday, I guess -- more discussion to come later. Feel free to discuss the roster decisions for next season, or if you're an insane optimist, discuss tonight's game. :)

Prediction: I won't be around for game comments tonight, but should be a fun loss. After the final buzzer, Ducks fans set their clocks forward one hour and their calendars forward six months.