Share All sharing options for: Ducks Gameday -- The BoC Saboteurs

So I haven't watched the last one-and-a-half Ducks games, but that doesn't mean I've missed any goals! :)

With Anaheim's loss in Dallas, though, the Stars are becoming a near-lock for the playoffs, according to Sports Club Stats' 50/50 method. That means that pretty much two western playoff spots have yet to be claimed, with five teams in the running (sorted by SCS's playoff odds):

It's intriguing -- the Ducks really could ruin things for all of California, as Anaheim has a game remaining against all five teams in the table (two against the Sharks). With some strategically-placed regulation losses (including one tonight) and a couple of big wins when needed, the Ducks could share their misery state-wide! 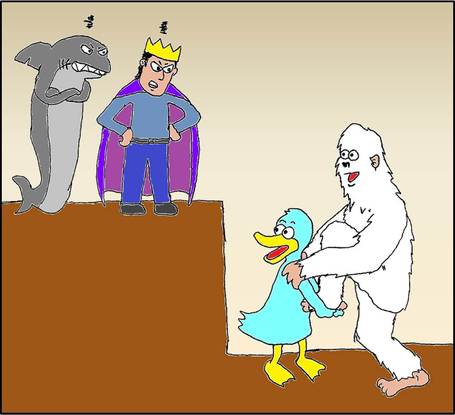 A couple of random items after the jump:

Hey Sleza and other European blog readers who are fans of specific NHL teams!

I can't really say that this is going to be worth your effort, but at least now you know about it. Word = spread!

Apologies for the email but I'd like to take two minutes of your time to make you aware of a book I'm working on about the NHL.

The plan is to pull together a book, hopefully published in September this year, about the experiences of European based NHL fans.

Each week, a question is posed about being a fan of an NHL team and people are invited to submit an answer for possible inclusion in the book.

The reason for contacting you was to get help recruiting fans to participate.

I'd appreciate any help that you can give!

Actually, maybe this isn't for Sleza. I think Megalodon should write a few fictional entries, though.

Lastly, I have to note this quote from Ryan Getzlaf responding to his coach's ref-bashing after the Dallas loss:

It’s tough. The game’s fast out there. Everything’s going quick. I had no intention of clipping the goalie. I went by and I tried to avoid their guy and end up touching the goalie by accident.

A play like that, if you’re not involved in the play, that can’t be. … in a good hockey game like that, these points mean too much. And it’s hard. It’s hard on them too. I know.

They’re doing their best job too and somebody’s always not going to be happy with them. We’re just trying to swallow our comments right now and continue along our path. And we’ve got to do a better job with that as a group.

Blink, blink. Getzlaf understanding the difficulty of NHL refereeing, and noting it? Frankly, that's the most captainly thing I can think of Baldy doing as an NHLer -- I'm kind of impressed. It was almost Saku-like. We shall see if this maturation thing continues.

Prediction: I should be around for game comments tonight. Ducks make it look interesting but strategically fail. :)