Oof -- just as the Ducks were getting back in sight of the western bubble, two regulation losses in a row. As the (fucking) non-swearers like to say, double hockey sticks.

That's the first time the Ducks have dropped consecutive regulation decisions in calendar year 2012, and I forgot how shitty it feels. Well, more accurately, the last time the Ducks were losing regularly, I wasn't feeling much at all. So congrats, Ducks! I'm no longer numb to losing! :)

But I am still lazy, so here's a recycled cartoon from two years ago that strangely still sort of works: 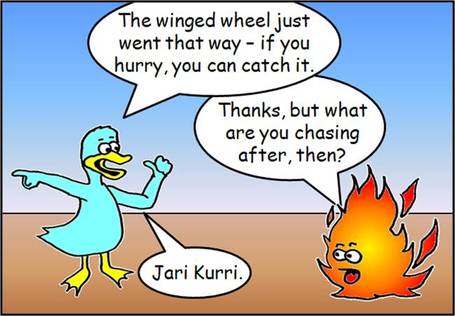 I don't even remember what Kurri milestone Selanne was chasing in March 2010, but nowadays it's the career points pursuit. Teemu sits just 3 points shy of Jari for 19th overall -- Finnsanity!

Anyways, while I was over at Hockey-Reference I started messing around with an all-time BoC career points list -- only counting points scored while playing for a California-based NHL team. Here's the top 25:

That wasn't for any true purpose, but it is kind of cool to look at, and I guess it will be useful once we start inducting players into the BoC Hall of Fame.

Very Lame Aside: Anybody want to hear a choir joke? Our choir director just celebrated a birthday, and for her card I scoured the internet to find a music-themed joke, and this one cracked me up -- you probably have to be in a choir to best appreciate it, though:

A successful choir's much-loved conductor was taken seriously ill shortly before a major concert. With only four weeks to go and several rehearsals to complete, an appeal went out for a short-term but immediate replacement. One of the bass singers had conducting experience and, to the relief of all, took-up the baton. The concert was a resounding success.

At the next rehearsal, the pro-tem conductor returned to the Bass section. As he sat down in his usual place, his neighbor turned to him and said: "Where the heck have you been? I haven't seen you for a month!"

Get it? Basses never look up!

Oh, and in case you missed yesterday's NHL games, here's a brief recap of one of them:

The Sabres played last night. They beat some crappy team.

Prediction: I won't be around for game comments tonight -- watching on delay. Ducks and Flames go to a shootout, then my recording runs out of time.