San Jose Sharks (bubbling) at Anaheim Ducks (babbling), 7 pm
Fear The Fin and Anaheim Calling -- why not get blogged down in the details?

So the Ducks are basically eliminated, and yet I still drew a pretty quality cartoon today. I know -- I'm as shocked as the rest of you! 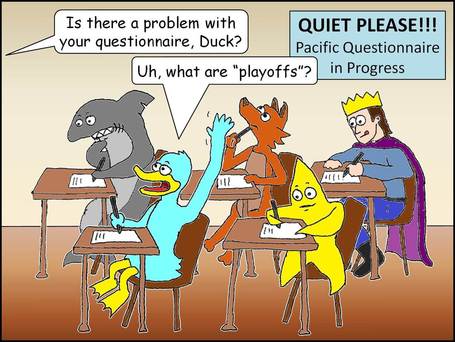 As the cartoon notes, there's a Pacific Division questionnaire running this morning at SB Nation NHL, featuring one blogger apiece from four of the five Pacific blogs (apparently Plank is a slacker), plus three bloggers from this one.

And since I'm such a slacker that I don't like doing more than I have to, here's my answers reprinted -- hooray for easy filler! :)

1. Why will your team win the Pacific?

2. Why will your team miss the playoffs?

Because games played in calendar year 2011 count towards overall standings. Since January 1st (a month after Bruce Boudreau took over), the Ducks are 22-12-5, the best 2012 record in the Pacific Division. There’s hope in Anaheim, just not for this season.

3. Which Pacific opponent will you most enjoy seeing fall short of the postseason?

That's an easy answer – the Sharks. There’s an entire e-generation of Sharks fans who have never known what it’s like to miss the playoffs. And this is a fanbase who jumps off bridges when they lose two conference finals in a row – it’d be sweet.

4. Not that any team in the Pacific has the luxury of being picky, but assuming your team makes the postseason, which possible opponent would you prefer to face in the first round?

That's an easy answer – the Sharks. No matter how awful Anaheim has been throughout this season, it hasn’t shown against San Jose. If this season series were a playoff series, the Sharks would already be eliminated five games in.

5. As a fan of a team that's fighting for the third-seed, while teams like Nashville, Detroit and Chicago who clearly deserve that spot instead fight for lower-seed, does the situation make you think any differently about the NHL's playoff seeding format?

Shrug – this isn’t a new feature, and it’s sort of insulting that it’s now an issue because more easterly teams are affected. In two of the past four seasons the Pacific Division has had its second-place finisher dropped to a fourth seed despite owning more standings points than the third seed. But I guess we weren’t crying loudly enough.

Everybody knows the drill going into the season: if you want a top-three seed, you have to win your division. Sorry, whiners – finishing second doesn’t "clearly deserve" you anything.

As the post title notes, I'll be in attendance for tonight's game in the usual Row B spot, along with two of my buddies plus special opponent guest Megalodon! -- he'll get to see up-close the Ducks' attempt to sabotage San Jose's pretty solid playoff odds.

Hey, I'm just glad there's still some meaning to this game. Earlier in the season, this looked like a formality game. Go (somebody else's) drama!

Prediction: An exciting game is somewhat marred when each team gets a goal disallowed for not being the Boston Bruins.