BoC Gameday -- I Can't Stop Either

Share All sharing options for: BoC Gameday -- I Can't Stop Either

Anaheim Ducks (7 points out) at Los Angeles Kings (3 points out), 7:30 pm
Anaheim Calling and Jewels From The Crown -- plus Meg has a Sharks Gameday below too! 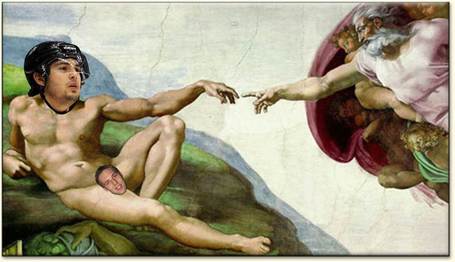 One other time I took a Rudy Kelly request.

A week ago some random Kings blogger named Rudy Kelly sent me an e-mail request:

I don't know if you're busy or anything but would it be possible to get the numbers we did on Jack last year for this season? Kinda want to see if he improved at all before we traded him. If not then no big deal. Thanks!

I was sort of busy (or lazy, I forget?), so I promised I'd get around to it in a day or two, promptly forgot about it, then finally remembered this morning when Rudy ran his post -- go read that. It's a small sample size obviously, but it's pretty damning. Jack Johnson sucks at hockey.

So this morning I decided to get my act together and run the JMFJ Effect test on the Kings' defensemen this season. If you recall from last season, the test compared how each defense partner did at even-strength with JMFJ vs. without JMFJ, and the results were damning there, too -- pretty much everybody had better results without Johnson on the ice. This season's results are tabulated after the jump, but I'll warn you now -- not every defenseman felt the JMFJ Effect to the same degree this go-round.

First, a quick note on methodology: I took all the goals scored in the Kings' first 61 games this season (for and against) and removed all power play goals, shorthanded goals, penalty shot goals, and empty-net goals. For the remainder, I looked at which defensemen were on the ice for each event.

I was shocked immediately by one result -- I haven't followed stats that well this season, but I wasn't aware that the Kings were getting outscored at even-strength. My table had 83 goals-for and 96 goals-against for team totals. Curious -- Los Angeles' results last year were much more balanced. Anyways, here's how the individuals fared:

Defensemen are sorted by the number of total goals they were on the ice with Jack Johnson, and compared to last year, the JMFJ result appears a bit more scattered.

So individually, results are kind of split -- I'm not sure what to attribute that to. Perhaps the Kings sort of learned a lesson last season and eventually found the kind of partner that could work with JMFJ's flaws. Perhaps there's just some dumb luck or outstanding goaltending that's flawing up the data. Perhaps I stayed out way too late last night and fucked up something in my spreadsheet this morning.

Whatever it is, it seems that perhaps the Kings could have lived with JMFJ, flaws and all, under the right supervision. That's not to say at all that he'd be worth his contract, really -- you'd hope guys you pay that well could do more than at best break even -- but Los Angeles was finding a way to hide him a bit better this year, perhaps.

Regardless, I'm happy to finally get that request out of the way. Now what the fuck is all this crap in my inbox asking me about the coaching tendencies of Randy Carlyle?! :)

Prediction: I should be around for game comments tonight -- stop on by! Though it doesn't benefit the Ducks, JMFJ is a -4.