César Chávez was a cool dude who spent years fighting against the harmful and damaging effects grapes have on Mexicans. I am going to celebrate his sacrifice by playing Mass Effect all day. Thanks, César!

Speaking of, you know who's cool? Alec Martinez. I like that guy.

Oh God, did I just connect those two in my mind like that? What the fuck, Brain.

(NSFW cartoon after the jump. Beware!)

Kings need to win these next 3 games, really important, you know the drill. I think the Kings will probably take 2 of 3 and then need to win 1 of the last 2 games against the Sharks. Isn't this exciting?!?!

In more important news, some asshole commenter said he doesn't read my stuff because I don't have cartoons. So I drew a cartoon of Earl & Meg's recent outing together and masturbated to it a shocking number of times. Behold! 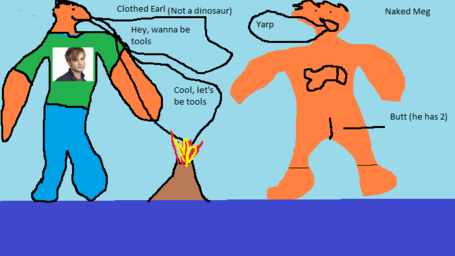 Prediction: Kings win, 3-2. Goals by Alec Martinez (x3). When asked if he scored in honor of César Chávez, Martinez says, "...I'm from Michigan."