Share All sharing options for: Sharks Gameday: Ray Ratto Solves All the Problems

In case you missed it after Thursday's loss to the Coyotes, sports analyst (and noted spokesman for flavored mustache wax) Ray Ratto had some advice for the struggling Sharks: "Just win the game!"

Some people (most prominently Sharks' broadcaster and Michael Rooker impersonator Drew Remenda) took issue with Ray's over-simplification and dismissive bluster, but die-hard Ratto fans (we call ourselves Rat's Bastards) know that this is just another example of Ray's trademark problem-solving skills at work. Mr. Ratto has no equal when it comes to straight-talk, and he has an uncanny ability to cut to the simple core of issues that other, smaller-brained people think are "complicated."

For the benefit of those who haven't followed Ratto's work as closely as me, here are some other examples of Ray's unmatched analytical mind at work: 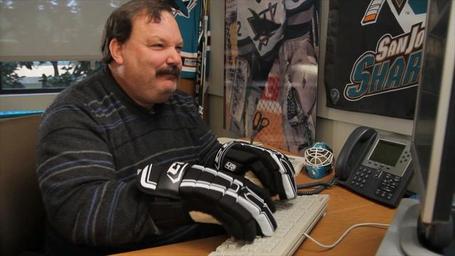 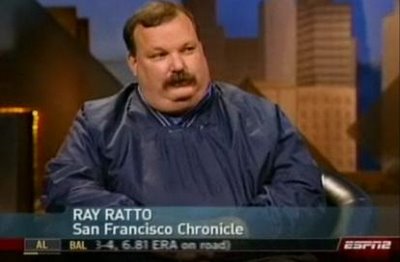 Ray Ratto helps you decide what to wear today: 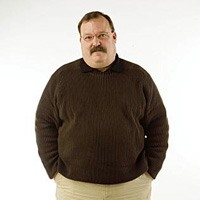 Thanks for everything you do, Ray. How would we survive without your guidance?

Tonight's game is probably a must win Sharks have to want it they're basically in the playoffs already Pacific division 3rd or 8th or 9th tough questions this off-season heart Joe Thornton Niemi final four games Stars Kings etc.

Prediction: Ray Ratto helps the Sharks figure out what to do ("Just shoot that thing that looks like a Ding Dong into the red thing with the net that sort of looks like white spaghetti if you squint!") and they win 4-2.

My 4th-favorite movie (and my favorite book) is Fear and Loathing in Las Vegas. In a fun coincidence, Ray Ratto looks just like one of the cops that attend the drug convention in that movie. And, based on his comments and attitude Thursday night, he seems to know as much about hockey as those cops knew about drugs.