Anaheim Ducks at Phoenix Coyotes, 6 pm
Anaheim Calling and Five For Howling -- plus Meg and Rudy with better posts below.

Today's been a bit swamped, so here's a quick mishmash of stuff:

A pretty important game for the BoC Sabotage Initiative tonight -- the Coyotes currently sit one point behind the Kings and one point ahead of the Sharks (and tied with the non-cartooned Stars), and each of these teams has four games left to play. If the Ducks don't want to be the only California team to miss the playoffs, best to make two points readily available for the Coyotes tonight! 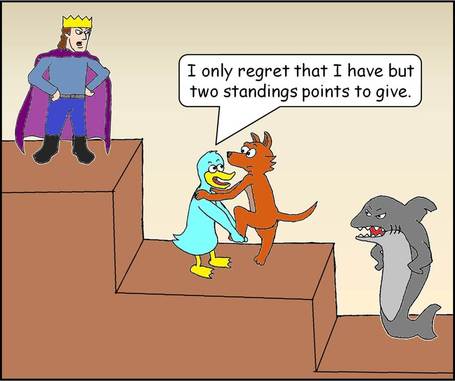 Carl from FFH took a look at the remaining schedule for four Pacific Division contenders yesterday (I've updated to reflect the Kings and Stars results from yesterday) and based on how each team has performed so far against their remaining opponents, it does seem a little bleak for the Coyotes:

Two of the squads involved in games left on the schedule, the Anaheim Ducks and St. Louis Blues, made coaching changes during the season.... games played against the teams prior to the coaching changes are not included in the match-up records mentioned in this piece.

The Stars have gone 3-6-0 against their final three opponents. They have records of 1-3 against the Sharks, 0-2 against the Blues, and 2-1 against the Nashville Predators.

Awww... c'mon, eliminated teams (and the Blues), let's help these poor Coyotes out! :)

It won't matter to me until the start of next season, but hooray! Free wi-fi at Honda Center!

Prediction: I will be around for game comments tonight -- stop on by! Ducks forget about the BoC Sabotage plan but fortunately lose anyways. Valiant effort by Fowler.