Sharks Gameday: You're Killing Me

Share All sharing options for: Sharks Gameday: You're Killing Me

Awesome gameday song NOT inspired by Blues music: Bound for the Promised Land

Back on November 17th, 2011, I wrote about the Sharks penalty kill. I discussed how it was, as the kids say, "crappy." I examined a few possible reasons for its crapitude, including 1) The Sharks allow too many shots 2) Niemi sucks 3) The Sharks miss Rob Blake and Manny Malhotra and 4) It's all just bad luck. We had some lively discussion about the PK and the consensus reached (well MY consensus anyway, which is all I care about) was that it was probably a combination of a few elements, but "bad luck" was an unsatisfactory answer.

The Sharks finished the season with the worst penalty kill among playoff teams (76.9%) and it has only gotten worse. In their three playoff games thus far the sharks have killed 61.5% of their penalties - though hilariously both New Jersey and Pittsburgh are worse at 40%.

The PK sucks, and it's unlikely it's going to get a whole lot better in a short amount of time, so I guess the Sharks need to stop taking penalties, right?

I don't want Todd McLellan to get fired, regardless of the outcome of this season. I think he's a good coach and a good fit for the team - but I guess he doesn't know how to run a PK. Either that or he doesn't really care. It makes sense - he was an offensive coordinator for Detroit (consistently one of the least-penalized teams in the league) before coaching the Sharks, so why the heck would he know anything about the penalty kill? He needs help. The Sharks need to hire an expert in what makes modern penalty kills successful.

According to the Sharks website, the guy in charge of developing "penalty kill schemes" for San Jose is Jay Woodcroft. I'm going to assume this is still the case, even though the information about him hasn't been updated since 2010 (it says he works on the PK with Trent Yawney, who is now retired). I don't know anything about Jay Woodcroft, really (for some reason he only has a Wikipedia page in German). He seems like a nice guy. But the Sharks can't kill penalties to save their lives (or to win playoff games, which is even more important than their lives) so if Jay Woodcroft is still the guy designing the "penalty kill schemes" then it's time to fire his ass.

With that out of the way, let's talk about more important things: Nana tweets.

Twitter is a useful tool for instantly gauging the reaction to stuff you put on the Internet. When I write a gameday story and tweet about it, I can get a pretty good idea of its popularity by the number of retweets and new followers it inspires.

When I posted my gameday story on Monday and sent out a tweet about it, two very important things happened on Twitter.

First, a woman called me a racist and then blocked me when I complimented her use of semi-colons and told her she was taking stuff too seriously. That was fun.

Second, I got a new follower: @TWEETSfromNANA.

@TWEETSfromNANA (or "Nana" for short) describes herself thusly:

Fun-loving grandma and devoted mother who is passionate about politics, CARDS baseball and BLUES hockey!

Nana retweeted my gameday story, which was a big honor for me. She obviously has a good sense of humor and, unlike most Blues fans, probably isn't an anti-Semite.

As a tribute to Nana, I present:

Corporate Twitter accounts open up exciting new opportunities for grandmas and grandpas to complain about stuff. 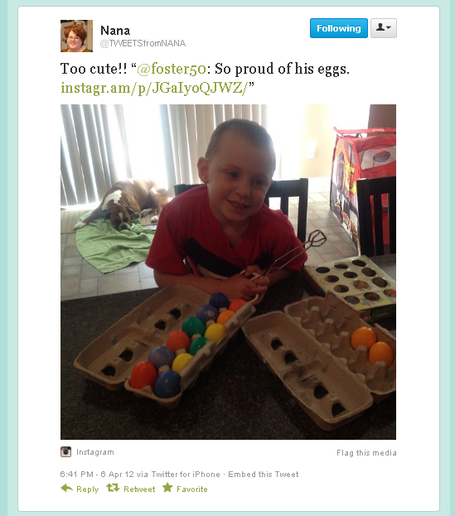 If there is one thing grandmas love more than Twitter, it's pictures of children.

Nana retweeted this one from @SippyCupMom. From reading Nana's Twitter feed it looks like she went to something called "Oprah's Life Class" in St. Louis. Nana was really stoked about it, and I'm glad she had a good time.

Another kid did something with Easter eggs and there was a picture taken of it. Kid pictures are like the grandma version of crack cocaine.

Kids these days with their crazy singers and bands! I tell ya, that's not music - it's just noise!

Also Nana said "hell," which is another reason she's cool.

Thanks for following me, Nana. I hope you enjoy today's tribute. And if the Sharks upset you by winning tonight I hope you can find solace in the nearly infinite number of pictures of children doing silly things the Internet has to offer.

Prediction: The Sharks manage to kill a few penalties and score a few goals, and win 3-2. Nana is sad but I'm happy, so it evens out.