The Masterton Trophy is Bullcrap

Share All sharing options for: The Masterton Trophy is Bullcrap

The Professional Hockey Writers Association is a moronic organization full of lazy half-wits and homophobes.

I suppose I should elaborate.

The Professional Hockey Writers Association gives this award annually to "the player who best exemplifies the qualities of perseverance, sportsmanship and dedication to hockey."

Yeah so...that's stupid. Is this a "Comeback Player" award or a "Service to Hockey" award or a "Good Citizenship" award or just a "Nice to Stupid Wiener Nerd Reporters" award? Let's take a look at the winners over the past few seasons and see if we can figure it out.

So five injuries, three cancers, one family tragedy, one battle with alcoholism, and one super vague "dedication to hockey."

If the point of this award is to recognize someone who overcomes an injury or disease, which it seems to be most years, then they should get rid of the "sportsmanship" part of the award description, and probably also the "dedication to hockey" part because it already says "perseverance" and that's redundant.

But the Masterton has the potential to be, and SHOULD be, much more than an award for guys who have horrible stuff happen to them. If the Hockey Writers Association actually paid any attention to the "sportsmanship and dedication to hockey" part of the award then it could become sort of a Lady Byng that people actually respect: an opportunity to honor a player who is actually a great human being, not just someone who had to deal with awful shit.

Are you getting uncomfortable right now, as I seem to dismiss the tragedies of players who battled cancer or horrific injuries? I understand - but that's the PROBLEM with the Masterton. Hockey Writers are all meek and cowardly, and none of them are going to vote for a guy on the grounds of "sportsmanship" when there's another guy they could vote for that suffered some awful tragedy because the writers are afraid of being seen as insensitive or callous. And that's why the Masterton Trophy is bullcrap.

After the jump I'll examine the three finalists this year, explain why they all suck and don't deserve the award, and then tell you who I think deserves a god damn trophy. 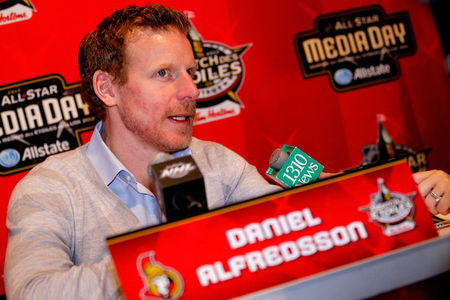 "Why yes I agree, I'm a stupid jerk who doesn't deserve the Masterton. Next question."

Alfredsson got nominated because 1) He had back surgery during the off-season and came back and played well 2) He's old and friendly and doesn't scare hockey writers 3) He's the captain of the only Canadian team that hasn't been a complete embarrassment this year. Let's work backwards through these three reasons and examine why they are all stupid.

First, clearly the pro-Canadian bias of hockey writers is evident here. It makes total sense, of course, as a staggering 79% of all the members of the Professional Hockey Writers Association are Canadian. There's no shame in this organization, so calling them out on their biased bullshit won't really have any effect, but I just want all of you to be fully informed.

Second, if the Masterton Trophy was just supposed to go to nice old guys then Mr. Rogers or Alan Alda would win it every year.

Finally, Daniel Alfredsson never would have needed back surgery in the first place if he wasn't constantly bending over to suck hockey writers' dicks.

Just kneel down, Daniel. It's easier. 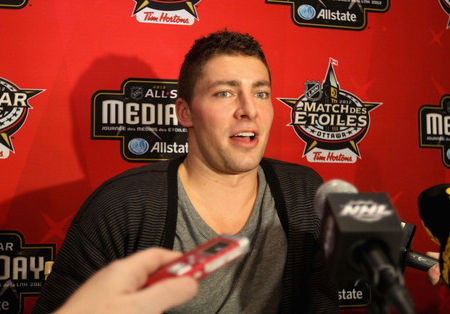 Joffrey Lupul looks like the brontosaurus skeleton before scientists realized they put the wrong head on it.

Oh hey, look at that: our second finalist just happens to play for the Toronto Maple Leafs, who play in Canada's biggest media market. How unexpected!

The reason Lupul was nominated (aside from the Canadian bias that's so obvious it makes you want to vomit) is that he had back surgery (again with the fucking back surgery) and then had blood infections and stuff and then came back and scored a bunch of points and played in the all-star game. So, basically, he has exactly the same story as Alfredsson only he is young instead of old.

If blood problems are what it takes to win this award then Jed Ortmeyer should have won it in 09-10, since he has crazy blood that basically tries its hardest to kill him all day every day. But Ortmeyer didn't win the award, so Lupul shouldn't get it either.

Also if you're going to give a trophy to someone named "Joffrey" you might as well just throw it in the garbage. 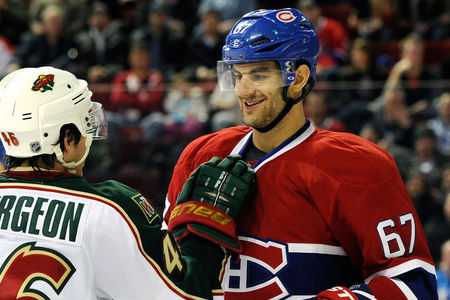 Are you seriously suggesting we give an award to this face?

Hey readers, are you sitting down? I hope so, because I'm about to totally shock you: our third finalist ALSO plays for a Canadian team!

Pacioretty is nominated because Zdeno Chara tried to destroy his skull during last year's playoffs. Max got better and was back being a pain in the ass this year and also now (rather selfishly) supports brain injury research.

Sure his return from injury was great for him I guess but what's the point of giving him an award for it? Here's the message we are sending by giving Pacioertty the trophy: "If you annoy the colossal half-troll who plays defense for the Bruins and he decides he wants to see what your brain looks like on the outside of your head and then by some miracle you DON'T die and you decide to keep playing hockey instead of just not having a job at all then you're the best!"

Also I don't think we should reward Pacioretty for ruining that stanchion with an imprint of his stupid face.

So, clearly, none of these jackasses deserves any award other than maybe the Corey Perry Memorial Screw You Douchebag Award for Douchebags. The members of the Professional Hockey Writers Association don't know what the fuck they're doing and should be ashamed of themselves.

You know who should have been a finalist for the Masterton, and should have won the whole fucking thing if it was worth anything at all? Tommy Wingels, that's who.

The You Can Play project made the case far better than I could:

When Patrick mentioned the idea of the You Can Play Project to Tommy, he (along with fellow Miami Redhawk Andy Miele) jumped at the chance to be involved. Not content with just doing a PSA, both Tommy and Andy volunteered to serve on the advisory board and generously donated the first two checks to get You Can Play off the ground. Tommy still works tirelessly behind the scenes to attract new players to appear in our videos and to raise awareness about the issues LGBT athletes face. He has been relentless in his desire to help end homophobic bullying in any way he can.

Since our launch, NHL players have been overwhelmingly supportive of our campaign. The tremendous displays of support from the hockey community may make Tommy’s work seem less courageous, less daring, or less important. As more and more superstars sign on to support us, it is rapidly becoming the norm for NHL players to speak out about LGBT rights. However, it is our belief that Tommy showed remarkable courage by being (again, along with Miele) the first to sign on. Tommy’s presence on the campaign was secured at a time in his career where his NHL job was not. He was a minor league player, and he had no way of knowing how his vocal support of You Can Play would affect his reputation with his future employers, teammates, and fans. Had we been unable to secure additional players right from the start, Tommy and Andy would have been standing alone on this issue, with potentially harmful backlash. Tommy shouldered that burden without hesitation.

In short, Tommy put his own NHL dreams on the line in order to help ensure that others are given a fair chance to follow theirs.

All of this year's finalists for the Masterton were the victims of unfortunate accidents that led to injuries. Their perseverance in returning to play at a high level is impressive, but it pales in comparison to the sportsmanship and strength of character that Tommy Wingels showed by standing up for what is right.

I'm proud to present Tommy Wingels with the first annual Battle of California Hangin' with Mr. Cooper Memorial Award for Being a Courageous and Cool Dude. 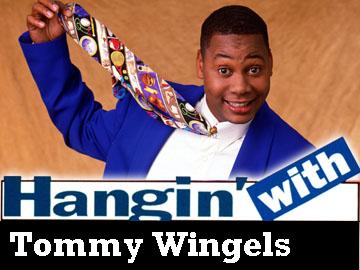 Congratulations, Tommy! You deserve it. The You Can Play editorial was totally right: being such a vocal and open supporter of LGBT rights at a time when doing so could very well have jeopardized your professional hockey career took giant balls. You, Tommy Wingels, have giant balls. And, thanks to your courageous efforts on behalf of the You Can Play project, more and more people now understand that if some dude wants to think about your giant magnificent balls while he jerks off, then that's perfectly okay. In fact, it's more than just okay.