So here's the thing:

Every year as teams get eliminated from the playoffs, the mostly-excellent Yahoo hockey blog Puck Daddy runs a series of farewell/season recap/roast articles about each team. These "eulogies," as they are known, are written by bloggers who are fans of rival teams, and are intended to be provocative, possibly offensive, and funny.

Not all of the eulogies are winners, as you would expect. Everyone has their own style. As rational adults we can read the eulogies and judge for ourselves if we like them. If we don't, we presumably just move on with our lives.

But this is not what happens with the people who comment on Puck Daddy eulogies.

For whatever reason, the comments on Puck Daddy eulogies are often insane, ridiculous, and moronic almost beyond belief. The commenters exhibit nearly every one of the seven deadly sins of Internet hockey fans.

Today I'm going to examine five different stupid things you can learn from reading Puck Daddy eulogy comments. For this post I read through the hundreds of comments on the five eulogies that have been published thus far, for the Red Wings, Sharks, Penguins, Canucks, and Blackhawks. By the end of this EXTREMELY TEDIOUS research process I wanted to kill myself only slightly less than I wanted to write this article making fun of Puck Daddy comments.

#1. Every eulogy is horrible.

Fuck you, you supercilious prick.

I actually agree with the last commenter here on one point: the photoshops in this eulogy were lame. So lame, in fact, that they did not exist, and were actually all CARTOONS, rather than photoshops.

I know it's not nice to mock the mentally challenged so I'm just going to assume "Anytime_I_can" is blind, not retarded. There's nothing wrong with making fun of blind people, right?

I don't know if people just don't give a shit about how stupid they look or if they are all nine years old or foreign or something but god DAMN there are some sloppy and incoherent motherfuckers bouncing around the Puck Daddy comments.

B Hoss is from Kelowna, Canada, where apparently the word "you're" does not exist.

Canada is a strange land indeed.

Also hahahaha at "the blues just sing the blues."

#3 "Fans of [INSERT TEAM HERE] are so [NOT FUNNY/STUPID/JEALOUS/OFFENSIVE]."

Anything bad anyone ever does or says in a eulogy is "typical" of the entire fanbase of that person's favorite team. 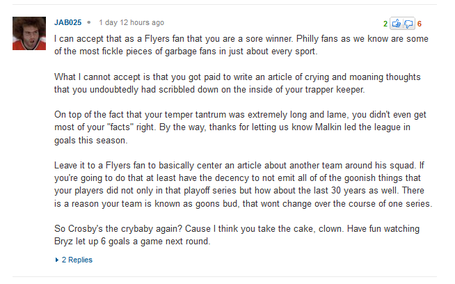 This one is sort of vague, but my point is basically that the people who comment on Puck Daddy eulogies are horrible and make you sort of lose your faith in humanity and the capability for goodness to exist anywhere on this cursed rock of a planet.

I'm no geographer, but I'm pretty sure if that happened it would fuck your shit up in Colorado as well. 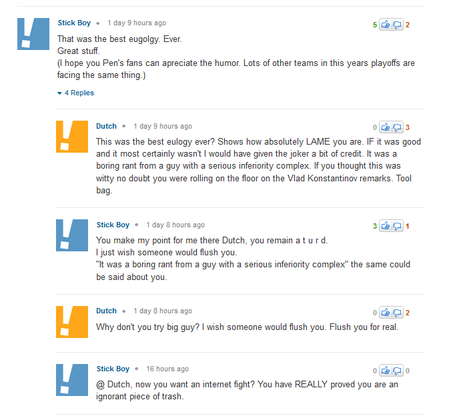 This jackass thinks his "puck mommy" insult is good enough to put out on the Internet for everyone to see, instead of the powerful argument for his forced sterilization that it actually is. 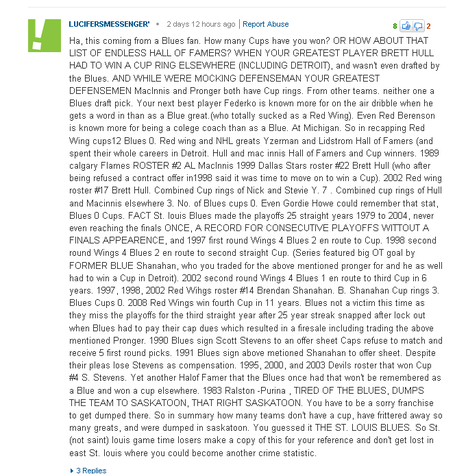 Jeeze what a loser that last guy is, huh?

Oh no! What will Yahoo do without Chusko?

This Oliver guy commented about a half-dozen times on the Detroit eulogy. Apparently he was really offended by the eulogy and sent e-mails to the NHL about it and kept whining and complaining about it for days.

Greg Wyshynski isn't going to respond to you, Oliver, and neither is the NHL. They're both too important and have better things to do. I, on the other hand, have nothing better to do - clearly. So I will address your concerns in place of Wysh or the NHL:

Shut your fucking mouth. You're a whiny little brat and your breath smells like shit and pickles. Just because you didn't like a couple of jokes on a website doesn't mean you need to whip yourself into a lunatic frenzy about it. I know your life has been hard since you lost your job at Target but if you just concentrate on getting your G.E.D. and learn to piss in the toilet instead of your cat's face I'm sure things will turn around for you soon.

Grow up, shut up, and fuck off.

Some day I hope to have the honor of writing a Puck Daddy eulogy. Rudy wrote a good one last year about the Ducks and Earl's roasted the Sharks a couple of times. I think I could do a pretty good job writing a eulogy - or at the very least have some fun insulting people in the comments.

I hope this journey through the Puck Daddy eulogy comments was as fun and educational for you as it was for me.