Share All sharing options for: Ducks Gameday -- Of Lesser Importance...

Anaheim Ducks at Edmonton Oilers, 6:30 pm
Anaheim Calling and The Copper & Blue -- plus a big game for Rudy and Meg below.

First off, congratulations to Anzeholics Anonymous and The Snuffle Bunnies on reaching the finals of the BoC Fantasy Hockey League! I was going to devote this entire post to recapping how they made it through the first two rounds, but you know...

...Drawception! -- a real time-killer for your average internet cartoonist. I've been on it for five days, participated in 111 games (probably 108 by cartoon), and have a score somewhere in the 700s. So yeah, I've been putting in some time into it. :)

It's actually been pretty challenging -- the time limit plus the basic mouse drawing (plus I'm sometimes too ambitious) means that I'm still drawing up to near when the clock expires, and there's been a couple cartoons that I've had to let the clock run out on -- they just never made it. But overall I've had more successes than failures, and after the jump, a list of my most popular cartoons so far. Just for fun, here's one I liked that didn't quite make it on the list -- I probably spent a third of the time working on the word bubble (writing is hard with a mouse!): 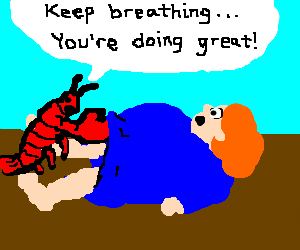 The "+8" refers to how many rec's the cartoon got, usually from participants within the thread. The remaining toons are all +11 and above -- quality! :)

Before the run-through, a quick note on technique. Meg asked me this on twitter yesterday:

@earlsleek Incidentally how come your ten minute Drawception doodles are so much better than anything you put on Battle of California?

I think the answer has something to do with what I'm doing for each venue -- when I draw for BoC, that's with a pen and paper that will go into a scanner, and I'm specifically leaving empty spaces that I will fill in later using MS Paint. The end result is a lot of block coloring, but it's pretty easy and clean.

For Drawception, since I'm directly applying colors to what will be the end product, I've been doing more silhouette-drawing and highlighting. Take the wrestler below as an example -- my first step in inserting him in the picture was to create an entirely-black shape of him, then add color on top of that. If I drew him flesh-colored as a first step, then I'd have to add black lines on top, and the mouse isn't really steady enough for that.

Also, because it's difficult to draw a forefront object, then draw a background object behind it, I do Drawception drawings backwards to forwards. Color in the background first, then draw a wrestling ring, then draw a wrestler's silhouette, then color him in carefully. That's what probably gets me into so much time trouble -- often the last touches are the most important!

I'm still working on it, but maybe for this blog I'll mix in more mouse drawings with my usual lazy scanner drawings -- Drawception is certainly giving me loads of practice! :)

My highest-rated Drawception drawings to date: 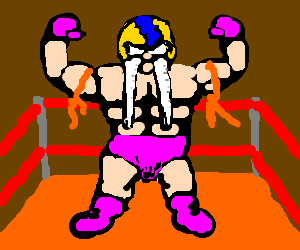 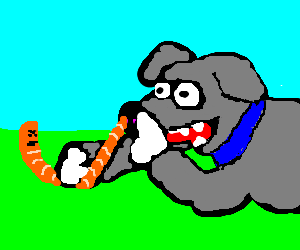 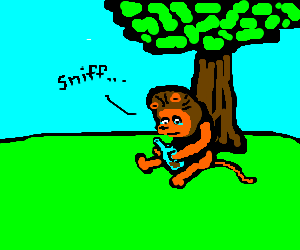 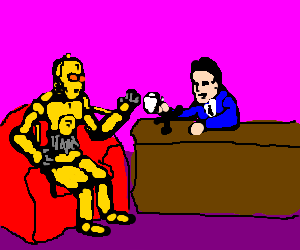 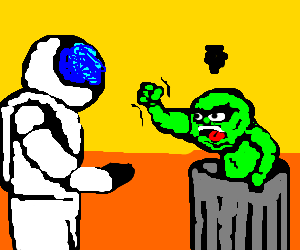 Special thanks to Quisp for his help in preparing me for the following toon. :) 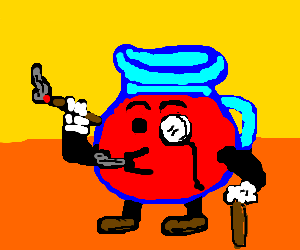 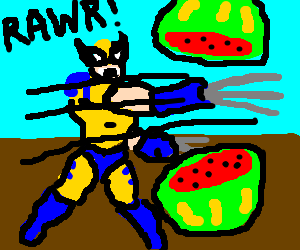 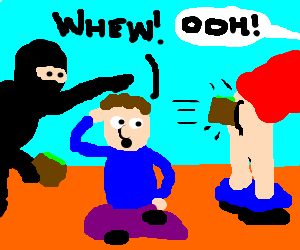 And the winner by a longshot is this toon, but not really on its own merit. I was the fifth-best cartoon on an incredibly artistically-talented thread, and its placement will likely boost my user score forever. It does feel weird to ride on the coattails of other web cartoonists (now I know how Rudy feels), but at least I didn't blow it for them! :) 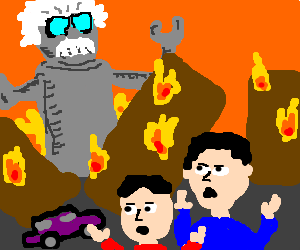 Prediction: I'm not going to be around for tonight's game comments, so the Ducks win -- enjoy the victory without me. Goals by Angry Mexican Wrestler, Accomplished Kool Aid Man, Wallet-Throwing Ninja, and Giant Robotic Albert Einstein.