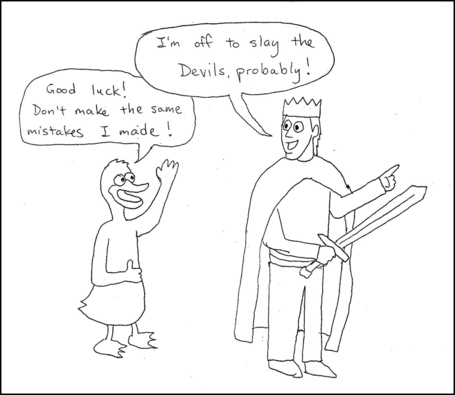 The L.A. Kings, after finishing off a 95-point regular season, have pulled off quite a series of upsets through the first three rounds of these playoffs. They've amassed a 12-2 playoff record while disposing of the western conference's two best teams along with another team that finished just ahead of them in the standings. Now they just have to manage a lengthy break while the New Jersey Devils finish up their eastern conference finals series.

Here's a similar story for those interested in repetition: The 2003 Mighty Ducks of Anaheim, after finishing up a 95-point regular season, pulled off quite a series of upsets through the first three rounds of the playoffs. They amassed a 12-2 playoff record while disposing of the western conference's two best teams along with another team that finished just ahead of them in the standings. Then they had to manage a lengthy break while the New Jersey Devils finished up their eastern conference finals series.

"All of this has happened before and will happen again."

Now I don't want to overplay the mirrored storyline too much -- each of these teams is upsetting favorites in their own special way -- but I do think I have some sense of the cloud of bizarre joy that Kings fans are sitting on right now. That spring of 2003 was beyond magical. Words don't quite capture it, but the universe drips of awesomeness when things are consistently going your way.

Enjoy the hell out of it, Kings fans.

One difference I wanted to highlight, mostly for selfish reasons, is a goaltending comparison between 2003's J.S. Giguere through three rounds of the playoffs and 2012's Jonathan Quick -- here's a look-see:

Both teams have relied on their money goalies, and both delivered very admirably, but there's still a pretty significant difference in their stats -- it's really tough to move from Quick's numbers to Giguere's numbers. To match Giguere's 3-round GAA, Quick would have to play an additional 221 minutes of shutout hockey -- more than 3 1/2 regulations. In order to match Giguere's 3-round save percentage, Quick would have to stop the next 140 shots-against.

And the key difference may be overtimes -- neither goalie lost a sudden-death game, but Giguere played a lot more of bonus-time hockey and made a lot more decision-saving saves.

But hey -- these differences aren't truly meaningful, except that Quick probably doesn't win a Conn Smythe if the Kings bow out next round. No matter what the table says, Jonathan Quick has been exactly the goalie that the Kings needed this postseason.

So, no real strong point I'm trying to make here -- I don't want to trivialize what the Kings have done, nor am I really implying that they are doomed to follow the '03 Mighty Ducks' tragic SCF fate (though if they do, expect L.A. to win a cup four years and one lockout from now). But it is kind of eerie how similar this bottom-seed-kicking-ass story feels, and I know from my experience it's pretty goddamn spectacular.

Really, the only point I want to make is: it's a rotten time of year to be a Sharks fan. But then again, it always is. :)