Free Will, Responsibility, and the Penalty Box

Share All sharing options for: Free Will, Responsibility, and the Penalty Box

Full disclosure: I haven't felt like writing anything at all lately since I've been pretty flabbergasted by how the playoffs are progressing. But Rudy is out of town this weekend and I've felt guilty for not contributing more to the blog recently, so ultimately I had no choice but to write all this craziness. And, as you'll learn in the rest of this piece, I really mean it when I say "I had no choice."

The debate over the existence and nature of "free will" has been going on for thousands of years. The concept has been discussed by great thinkers in philosophy, religion, and politics...and today it will be discussed by some yahoo on a hockey blog.

If you're totally unfamiliar with the "free will" question, you're probably an idiot. But don't worry, idiot: there's always Wikipedia. In brief, discussing whether humans have free will involves questioning why we do what we do, and how much control over our own lives we really have. Do we actually choose the actions we take, or is our every decision predetermined? If we had the chance to do our lives over again, would it turn out any differently? When presented with a choice, we feel as though we can choose to do A or B. But what determines which option we choose? What forces shape the mind and soul that make the choice?

To me, it seems pretty obvious that "free will," as most people use the phrase, doesn't actually exist. Here's why: everything that makes up who I am, my opinions and willpower and morality and likes and dislikes and everything, comes from either my biology or my environment. Those two things are all that make up a person, and nobody is in control of their biology or how environmental factors influence them, so therefore no one is really free to make a choice that isn't 100% determined by natural or external factors.

(Sidebar: if you're a religious person and you believe that a god plays some role in the person that you are, that's fine - a god can be seen as just another environmental factor for the purposes of this discussion.)

To elaborate: when a person is born they have certain innate tendencies due to their genetic makeup. As they mature their personality is further shaped by parents, friends, society, etc. And that's all there is to a person. There is nothing about who I am that I created. Even if I decided to study ethics or something in order to become a better person, my decision to do that is ultimately traceable back to biology and environment. I am completely a product of forces outside my control. This isn't an attempt to escape personal responsibility - this is an acknowledgment that, if we are brutally honest with ourselves, responsibility makes no sense. Why am I rewarded or punished for my actions, when my decisions come from genetics and environment, two things that I have nothing to do with and no control over?

"You can do what you will, but in any given moment of your life you can will only one definite thing and absolutely nothing other than that one thing." -Arthur Schopenhauer

Of course basically nothing that humans do makes any sense without our shared ILLUSION of free will and responsibility. It's silly to feel angry when someone betrays you or to feel thankful when someone helps you out if no one has any option to do any differently, but society would crumble if all of us didn't act like we're all totally in charge of what we do, so that's why it's basically impossible for us to abandon the idea of personal responsibility, even if we can logically argue that it doesn't make sense. Our brains are probably hard-wired to believe we are all in total control of our actions. If someone is rude to me, I get mad at the person - I don't get mad at their rude genes or lousy parents or crappy school or whatever else it was that made them rude. We just can't operate on that level.

Human beings create systems of reward and punishment for many reasons. We talk about certain people "deserving" praise or scorn. Really, though, what established reward/punishment systems accomplish is to change people's behavior by becoming another external environmental force that determines the decisions we all make. In other words:

The State, Schopenhauer claimed, punishes criminals in order to prevent future crimes. It does so by placing "beside every possible motive for committing a wrong a more powerful motive for leaving it undone, in the inescapable punishment. Accordingly, the criminal code is as complete a register as possible of counter-motives to all criminal actions that can possibly be imagined..." -Wikipedia/Schopenhauer

And this brings us to the penalty box.

The function of the penalty box is analogous to that of prison or the death penalty in larger society. If, as we have discussed, none of us are really responsible for our actions, then punishment for misbehavior isn't about giving the offender what he deserves - it's about discouraging similar offenses in the future. The league has clear and definite penalties for infractions, and those penalties become part of the player's mental calculus in the split-second he has to make the (probably unconscious) decision: do I break the rule or not? 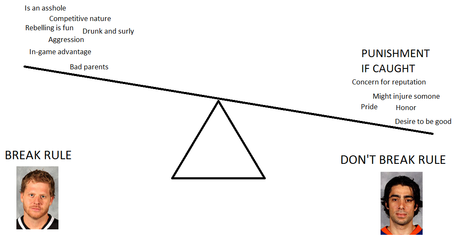 This balance scale represents the decision-making that goes on in a player's mind. Whichever side is heavier determines the player's action. Clear, immediate, and straight-forward consequences for actions are essential if you want to change people's behavior. Most of our choices go on beneath the level of conscious thought, so punishments must be simple and obvious enough for us to internalize and tip the scales away from bad behavior without us having a chance to stop and think about them.

If a certain bad behavior is a widespread problem, the solution is to increase the mental weight of the punishment. That can be determined by either increasing the penalty (more minutes per penalty or more games per suspension) and/or by punishing more often (calling more of that type of penalty, so the likelihood of being punished increases). It is critical that this increased punishment goes on for a long period of time, so that players have a chance to internalize it and make it a part of their unconscious decision making process.

Fun fact: whether or not you agree with me, reading this article has altered your mind and personality in very small ways. Even if you forget everything I've said after five minutes some of the ideas I've presented will be in your head somewhere. Every experience you have in life makes an impression on your mental makeup, so in a certain sense, I AM IN YOUR HEAD, RIGHT NOW.

And I'm going to make a real mess of the place.

In conclusion, free will is bullshit but the concept makes us behave ourselves, so everyone just keep it up, okay?

The contents of this post and of my brain were heavily influenced by the brilliant book I Am a Strange Loop by Douglas Hofstadter.