A controversial Duckspective: Why not the Kings?

Share All sharing options for: A controversial Duckspective: Why not the Kings?

Hey everybody! I'm back from Spain and am finishing up my first five-day work week in quite a while. Whew! Anyways, here's the photo from Barcelona that best represented the Anaheim Ducks' season, taken outside the Maritime Museum. 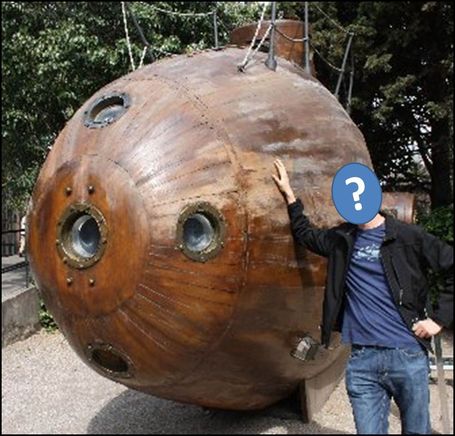 It's a replica of a submarine built in 1850something that I assume was destroyed within one minute of touching water. But a proud effort nonetheless.

Anyways, I'm still a bit disconnected from hockey -- my trip to Spain meant that I saw nothing between the Hossa hit and the trio of round one game sevens, and then my brother came to town last week for my niece's first birthday party, which meant an Angels game and a lot of uncle-ing duties, and then there's this day job which prevents me from seeing a lot of east coast goals, and there's always Drawception, and...

But even though I've only seen one Kings goal this round (Mike Richards at the start of game two), I'm up to speed enough that I can put this opinion out there: I'm a Ducks fan, and I'm kind of hoping the Kings win the Stanley Cup.

Let me explain a bit -- first off, this sort of rival-rooting is flimsy; the games I've been able to watch I do often catch myself rooting for Kings-failure -- that's instinctive. But when I'm able to take a step back and think about my rooting alternatives, I keep asking myself, "Why not the Kings?" It's not like there's another team out there worth rooting for.

What am I going to do -- root for an east coast team? I hate most of those teams on pure principle alone. They get their proprietary Winter Classics and OLN Versus NBC-SN coverage and Hart Trophy nominations and whatnot -- they won't get any extra love from me. Here's a closer look at why each team sucks:

Beyond the antics of John Tortorella, I don't know what to like about the Rangers -- they obnoxiously ruin every July by signing Marian Gaborik or Brad Richards, they have no discernible character to cartoon, and Henrik Lundqvist turned a two-goalie Vezina race into a one-goalie Hart nomination. They got their Winter Classic appearance and 24/7 feature already; fuck those guys.

Ugh, the Flyers? Though there is a lot of former-SoCal in the Flyers lineup, and while Bryzgalov is constantly amusing whenever he opens his mouth, I can't root for Philly. Their crazy summer of dumping superstars has somehow worked out for them, but for the sake of GM sanity, it needs to stop soon. Also, while an aged Jaromir Jagr is still awesome; he needn't outshine the Finnish Flash's late-career-resurrection cup. The Flyers played in their second Winter Classic this season -- thanks for Luca Sbisa, but fuck those guys.

I used to like the Devils, but then the 2003 Stanley Cup Finals happened. And while we're getting pretty far removed from that, I don't really need another reason for the media to worship Marty Brodeur -- we've endured enough decades of that already. The Devils don't get Winter Classics or Hart nominations like most east coast teams, but they're still a spending menace: the Ilya Kovalchuk contract ruined an entire UFA summer. Except for Patrik Elias who is awesome and Petr Sykora who is still adorable, fuck those guys.

The Caps aren't a wholly unlikeable team, but there's two main reasons I can't root for them. For one, I don't want the removal of Bruce Boudreau to be seen as such a good thing; his departure shouldn't be just what the Caps needed. Also, Coach Hunter's strategy of limiting Alexander Ovechkin's ice time to ridiculously low totals is bad for hockey -- the price of winning should not be suppressing the most talented players on the ice. Stop ruining hockey, Hunter; fuck those guys.

The Blues aren't all bad, but they play in a time zone which may as well be eastern. And sure, it's a good thing that the Blues are competitive again, but I don't think I'm ready for them to become cup winners just yet. Hitchcock has worked some magic out in St. Louis, turning Brian Elliott into a feared name, but that has to stop somewhere short of a cup, just for sanity's sake. And I don't want to spend my summer drawing blue notes -- fuck those guys.

The Coyotes are a likeable team, at least in that their fanbase has been beaten up a great deal over the years. But still, they're run by the league, are seemingly constantly on their way out of Arizona, and still manage to turn every goalie on their roster into an overnight superstar. Phoenix winning the cup would put some summer pressure on Anaheim to improve, but I'm not sure it would be the right message -- stick to your budget at all costs and cry poor whenever possible. Ray Whitney is great, but fuck those guys.

I do like that Nashville beat the Red Wings -- at least now Anaheim isn't the only team to lose a playoff series to the Preds. But one series win is enough for me in that regard; no need to push that further. Preds are obnoxious in that they love drawing stupid suspensions (Bobby Ryan stomped me! Jarkko Ruutu hit me!), but when Shea Weber obliterates Henrik Zetterberg, everybody's suddenly cool with it. And then they pull off some shit about suspending their own players and win? Fuck those guys.

And now we get to the ol' Kings, the last BoC team remaining. They're pulling a page out of the Ducks' 2003 playbook, except without all those one-goal wins. And while that does sting a bit, there's some upside to the Kings making a push to the cup.

For one, it puts immediate pressure on Bob Murray and the Ducks to have a big improvement summer. This pressure may already exist with the Kings' success thus far, but it'd be really extreme if there were a cup parade on Figueroa. What otherwise might be another "wait for Teemu then do some cheap tinkering" offseason might suddenly become a "big splash" summer. That's not necessarily a good thing, but it'd be exciting.

Also, a Kings cup win would make hockey pretty relevant again in SoCal -- already I feel like I've had more hockey conversations with strangers in the past week than usual. Even if it's Kings fans, that's cool -- way better for me than having to sit through another Lakers or Angels conversation.

But mostly, think about the outrage and depression of Sharks fans that would result -- to officially be last to win a cup in California, they'd be an emotional wreck. And this is a fanbase that already overreacts to everything -- man, it would be sweet to watch. Heck, they might even overpay for Dustin Penner this summer -- he's the key to postseason success in California, apparently. :)

Anyways, feel free to chime in with your perspective: can you root for the Kings this postseason? Why or why not?

One other development that's been eating up some time: thanks to Drawception's urgings, I bought myself a drawing tablet attachment for my computer. I'm still really trying to figure out how best to use it, but this cartoon was drawn without use of a scanner. It's not great or even very good, but I'm still figuring this stuff out. 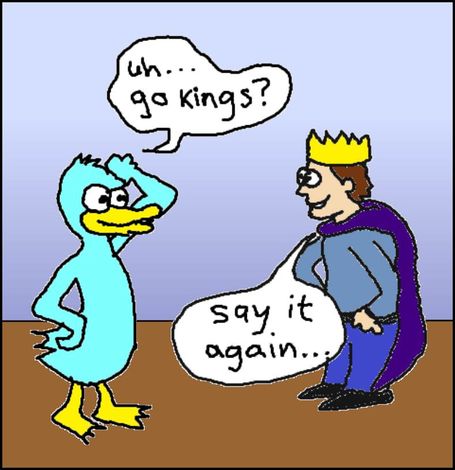 Anyways, I'll be playing around with that some more in the coming days -- let's see what develops there.