With the 6th pick in SBN's mock entry draft, the Anaheim Ducks select...

Share All sharing options for: With the 6th pick in SBN's mock entry draft, the Anaheim Ducks select...

Well, now that the postseason is finally over with (really, Kings?! SIX games?!), we can move on to much more important things in the world of hockey. Like a make-believe NHL entry draft! :)

Once again, SB Nation's NHL blogs are putting together a mock draft, and once again, Anaheim Calling let the Ducks' pick fall on my ignorant shoulders. I know practically nothing about pre-NHLers, but I'm gullible enough to participate anyways! Hooray! :)

If you recall last year, I made Anaheim's 22nd overall pick, and drafted a kid who seemed to fall in that late-first-round range, but mostly he was selected based on how easily his name could be converted into a cartoon. Then the whole thing turned moot on actual draft day when the Ducks traded the pick to Toronto for the 30th and 39th overall picks, but that's the way blogging goes sometimes.

So without further ado, with the sixth fake pick in the 2012 fake draft, the Anaheim Ducks fakely select... 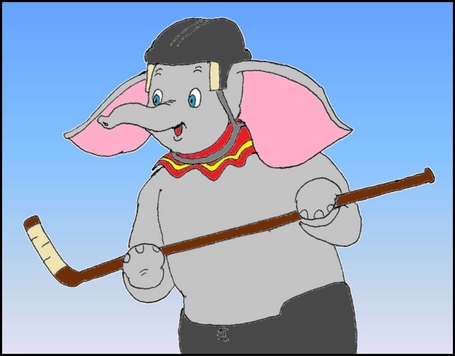 Not blessed with outstanding size or agility, Dumbo has an impressive wingspan nevertheless, and he isn't afraid to get his nose dirty every once in a while. No real hands to speak of, but given a little confidence, he can positively fly down the ice. And while his agent is a real rodent, the upside to this prospect is that he will pretty much play for peanuts.

Will the Ducks select Dumba with their real sixth pick? I dunno -- depends on how many cartoonists are at the draft day table, I guess. Anyways, feel free to pick on or support my blind pick, or just write some silly fan fiction about Dumbo the hockey player in the comments. :)