Just about two weeks ago, just on the eve of the SCF Game 4, I got a trio of cartoon requests, all asking to be completed in time for a Kings' fourth victory (so pretty much a 24-hour turnaround). I managed to hustle up and finish them all before the second intermission of G4, which of course the Kings lost, but two games later the cartoons were applicable still (fortunately none of them were broom cartoon requests).

Since nobody really linked back here for my efforts, here's a late recap of the three requests -- can you guess who wrote this first one?

I assume youll have some updated toon with the kings with the cup?

something like oh look at what the nieghbor got...but the shark is talking to himself unaware or something haha

cant believe the kings are doing this....rudy is gonna be intolerable....but we get to make fun of the sharks as a conselation prize...

hope things are well my friend with your job

Here's what I drew for Spade's request -- you've already seen it dropped into a fanpost after G6. 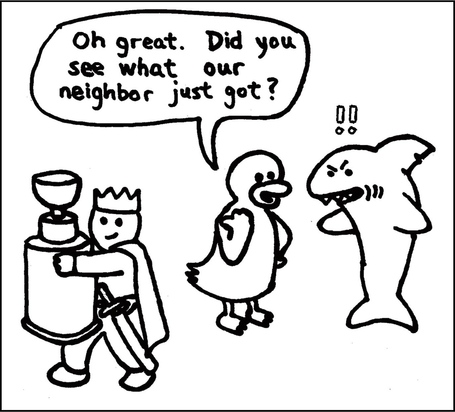 From the other side of the universe (otherwise known as the "eastern conference") came my second request:

Not sure if you have the time but I was wondering if you could make a couple of your cartoons for the inevitable Kings' Cup win.

1. The Leafs, Seals, and Blues looking sad as the Kings leave the No Cups Since 67 Club
2. The Kings sitting down with sad looking Hawks, Penguins, and Bruins at the "Unstoppable Dynasties Club"

Actually, if you have better ideas then feel free to play with them and if you're busy no worries.

p.s. and they probably could use Sharks looking longingly through a window somewhere in there.

I only promised (and delivered) the first of the two requests on this e-mail, and never did get the jealous shark in there, but a fairly solid deliverable nevertheless. My first golden seal! :) 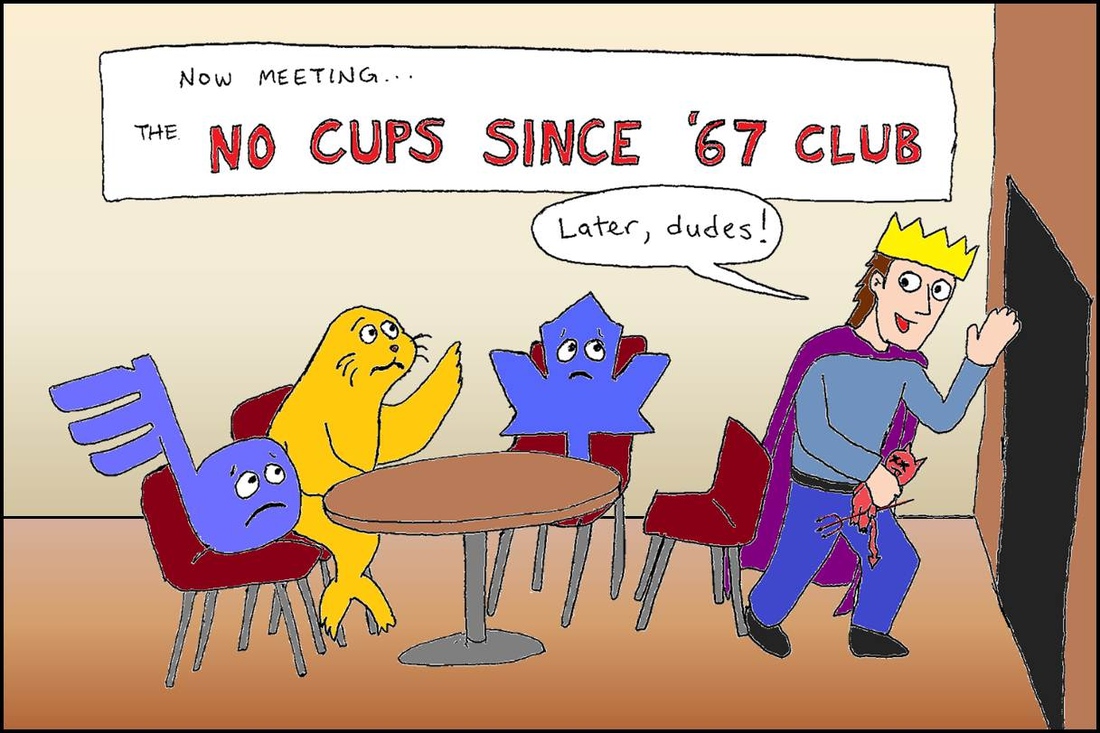 Actually, I probably would have drawn both cartoons for PPP, but then in the late afternoon I got a third and seemingly most-urgent cartoon request:

I've been meaning to ask you for awhile to help me with (i.e. create) a new drawing for the logo of my new blog. I've been using a crop of your brilliant JftC logo, which is fine but obviously temporary. About a minute ago it occurred to me what I need and what must happen. Either: I can color in your line drawing, as before. The thing is, it would be ideal to reveal the new logo literally the second the Kings win if indeed they do win. Which means I would have to badger you into whipping something up tonight or tomorrow morning, so I could get coloring.

I really don't like tempting the hockey gods with assumptions about things that might not happen, but it's really too good an idea for me to pass up, or at least for me to pass up bugging you about.

I hope to God you are around and amenable to my annoying charms.

Whoa -- this wasn't even a 24-hour request. Quisp wanted a design that night, essentially, so he could get to image doctoring. Immediately it became the top priority (though I warned him that I was going to be doing lots of toons that night), and I was able to get some pretty solid drawings together for him: 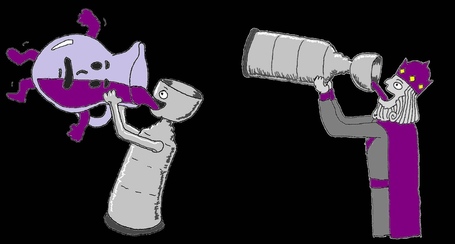 Of course, by the time Quisp was done picture-doctoring, it changed quite a bit (I didn't know he wanted an insane Kool-Aid man!), but at least I was able to pick up an assist on the play. :)

You're welcome, Kings-cartoon-seekers. Any other requests?