I've been having some trouble mustering up hate for Jersey because I, like every other sane person on this planet, couldn't give less of a fuck about them if I tried. It wasn't until Meg opened my eyes to the brutal assault on Los Angeles by some Jersans (?) that I took to Wikipedia to come out with some insults of my own. Fuck you, Jersey!

-Jersey only has 95,000 people within its boundaries. Pathetic!

-Jersey is a... bailiwick? I have no idea what that means but it sounds stupid!

-Jersey is an "independent nation" but it is subservient to the crown of England and relies on them for protection. Can't fight your own battles, eh Jersey?

-Jersey is located in the English Channel. More like Change the Channel, am I right? (I am not right.)

"Yeah, we could totally become independent whenever we want." "So, we should be independent?" "Uh, not quite yet." 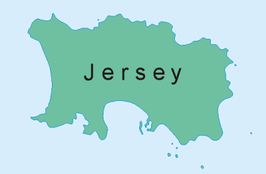 -Does it look like a stubby animal opening its gaping maw to anyone else? And it has a tiny dick?

-Jersey has Jersey currency that is not considered legal tender outside Jersey. God that's so sad.

-The most famous person from Jersey is Henry Cavill, who is going to be Superman in the upcoming film. I don't have a joke here, that guy is cool and really pretty.

-Jersey is a tax shelter for wealthy British & French people. A bank account there comes free with your first monocle.

-Despite all this, Jersey somehow manages to be the 2nd shittiest place with "Jersey" in its name.

Prediction: Kings win, 4-2. Jersey curses their crown-appointed representatives but can't do anything about it because, well, they're Jersey.