Share All sharing options for: Whoops! Battle of California turns 6.07945!

Hey, everybody! Battle of California turned six years old (like a month ago)! Of course, I was too much on blog-summer-mode to notice in time, and then I procrastinated some more while the Kings kept making the playoffs look way too easy, but a blog birthday is always worth a mention once a year (or so).

How it started: James Mirtle wrote BoC's first post, back on May 9, 2006, as an imitation-is-the-sincerest-form-of-flattery response to Battle of Alberta, and just three days later, I contributed my first cartoon: 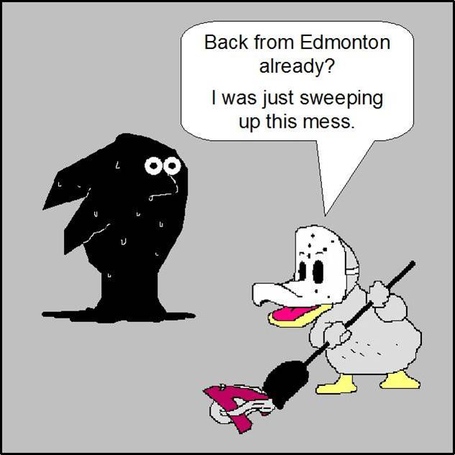 I'm pretty sure this was entirely done in MS Paint.

Oh, how far we've come fallen since then. :) Just think -- when this blog first started, we weren't even looking for Kings writers, because (in Mirtle's immortal words) they don't get a blogger "if they can't make it to the dance."

Oh, Mirtle. How little you know about hockey. :)

A sincere thanks to all of you readers (and especially those workhorses Meg and Rudy) for putting up with my laziness -- over the years, it's really the comment sections that have made this a pretty special site. To many more years of nonsense!

Because of my forgetfulness/laziness, our sidebar carried this "we're 5 and we know it!" image a bit too long: 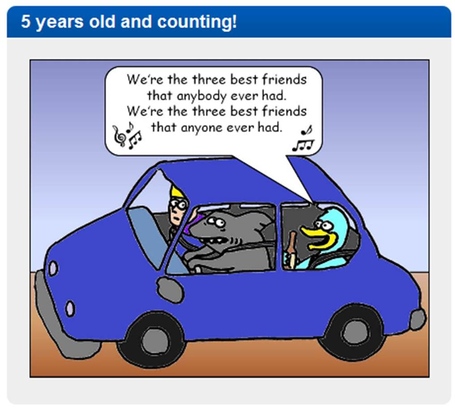 So now the sidebar-widget text is a bit more appropriate -- this will sit around until the next blog birthday (or a month afterwards, probably): 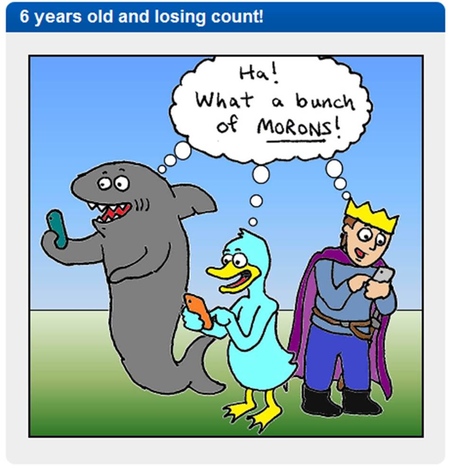 Cartoon from the release of the SBN iPhone app.

And yeah -- I've managed to write this three-image post without posting any new cartoons, but I have been cartoon-busy nevertheless. On Tuesday, I got three separate e-mail requests for cartoons to be unveiled yesterday all across the internet if the Kings finished their sweep -- I managed to finish all of them by the start of the 3rd period, which of course meant the Devils won and none of them can be published yet.