Book Review WTF? I Must Have Bobo!

Share All sharing options for: Book Review WTF? I Must Have Bobo!

Over this past weekend I had a chance to read through a few children's books down at the local book shop, and I ran across one that spoke to me like few books ever have before in my life.

The book was called I Must Have Bobo! It was written by Eileen Rosenthal and illustrated by her husband, Marc. It tells the story of a young boy who just wants to have a good time hanging out and playing with his favorite toy, a sock monkey named Bobo. Unfortunately, there is one big obstacle in the way: an interfering cat named Earl. 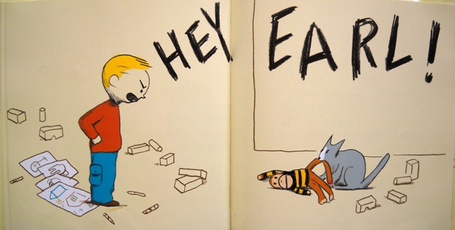 Every time the boy tries to do something fun or awesome with his friend Bobo, Earl ruins it. Earl's always knocking stuff over, tearing stuff down, and just generally being a menace. He keeps coming between the boy and his monkey friend, like a demonic, furry little third wheel. It's heartbreaking. The boy just wants to do cool stuff with his friend - why can't Earl just let that happen? WHY? Damn it, Earl, just let the boy and his monkey have their fun!

This story about two friends who are constantly annoyed by a pain in the ass named Earl really touched me. I was totally able to relate to it.

Because I have a cat, you see.

That's why I could relate to it.

That is the only reason.