The threat of a future lockout is partially my fault.

Share All sharing options for: The threat of a future lockout is partially my fault.

Sorry, everybody. My bad.

The players and the league are once again playing a game of Lockout Chicken, using the September 15 CBA expiration date and 76,000 pages of semi-cooperation to pretend to work together, while also setting the stage to blame a lockout on the other side's greed. And while a lockout seems totally unnecessary, I can't help feeling that it's bound to occur -- and to some degree it's my fault. 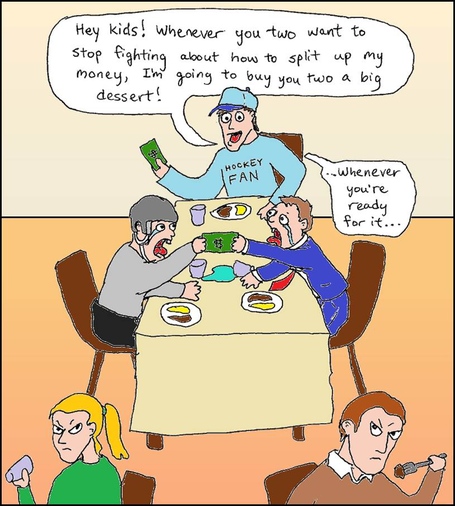 Why me? Because I taught the league and its players zero lessons last time when the 2004-05 season was canceled, even though that year-and-a-half away from the NHL killed me inside. I had to turn to bull riding (!) to pass the time, and while I'll admit there's some guilty fun in watching cowboys get killed, it isn't anywhere near as awesome as hockey. (But ironically, I was one of the few hockey fans who knew what channel OLN was before the NHL moved there.)

I was weak last time -- as soon as the NHL announced it was once again ready to accept my money, I was more than happy to give it to them.

If you're dining in a restaurant and one table over there's two young children causing an annoying ruckus, it's certainly frustrating. But you really shouldn't blame the children for being unruly -- children generally do whatever they can get away with. Rather, blame the parent who allows it, then even buys them ice cream afterwards.

Last lockout, I was that awful parent -- I rewarded the NHL immediately following a gut-wrenching year off, without any sort of punishment for the anguish that they put me through. I attended the first (Mighty) Ducks game in 2005-06, bought more than my fair share of concession liquor, and throughout the season pretended like the lockout never occurred.

In terms of my spending, the NHL lost one season of it, but as soon as it the CBA standoff was resolved, there was no go-forward loss; I and other hockey-starved fans were way too willing to immediately forgive and forget. And if I'm the NHL or the NHLPA, I'd expect similar results after this version of Lockout Chicken finishes.

But not this time -- this year I'm much more resolved to be a better parent. This time I'm ready to punish.

The NHL schedule is slated to begin on October 11, 2012. If, for CBA-related reasons, the season does not start on that date, I will count the exact number of days that pass until the adjusted opening day occurs. Then, for that same number of days from the new season start, I will not spend any of my money on the NHL product -- I will do my best to enforce a personal financial boycott of the league and its sponsors.

That is not to say that I won't be following the Ducks and their fortunes, or even writing gameday posts -- I'm too much a hockey nut to credibly pledge a boycott there. But I'm going to do whatever is in my power to keep the NHL out of my pockets for a pre-defined punitive stretch of time. No NHL Center Ice. If I've got tickets to games, I'll sell them at face value to somebody else, hopefully preventing an additional ticket from being purchased from the team. No NHL paraphernalia purchases from the team store or online. No liquor from the concession stand. :(

Alone, I'm not really going to scare the NHL or the NHLPA into different behavior, but if enough hardcore fans can publicly and credibly pledge to cause the league to lose out on lockout profits plus future profits, theoretically there is a point where we could scare the parties into a more sincere and urgent form of negotiation. If the players and the league start worrying that a lockout will cost them in future income (something that isn't a credible concern after last lockout), perhaps a different outcome could emerge -- one in which the 2012-13 season starts on time.

So sure, it may be tough, but this is my challenge to hardcore hockey fans: make a credible threat about how your future spending will change in the event a lockout re-occurs. And whatever you pledge, do your best to stick to it. It's probably too late (and this blog is too lazy) to change the course of how this CBA negotiation plays out, but at the very least, the next time the NHL and NHLPA play Lockout Chicken, I personally won't feel the same degree of bad-parent-guilt about the kids crying about how to split up my dollar.