So a buddy of mine texted me yesterday -- it turns out a friend of his had just started his own hockey website and was looking to spread the word. And man, does it pay to be a friend of a friend of Earl Sleek -- I'm gullible as fuck!

So give a warm BoC welcome to NoHockeyLockout.com -- a friend of a friend of mine's (hereby known as "FOF") new website. It's still in a design phase, but there's already a decent start of collected thoughts -- FOF has put together some facts and opinions on the current CBA negotiations, and it doesn't take too much reading to see what side of the Lockout Fence he stands on.

As for the website itself, it's sort of cool how FOF has chosen a website name with the initials NHL -- the main downside there is that the existing NHL.com URL is probably very expensive to buy. Now to highlight some key excerpts from the fledgling site:

The full site is coming in the next week or so (I AM STILL DECIDING ON BLOG SOFTWARE THAT ISN'T THE INCREDIBLY INSECURE WORDPRESS), but for now here are a few things to make you think...

This actually made me think quite a bit about the incredibly insecure Wordpress... :) 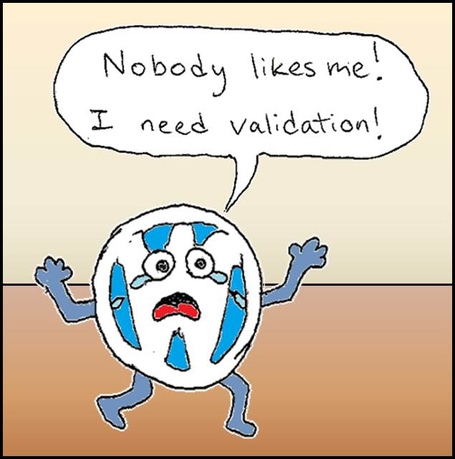 There are several goals for this site. I would say the ULTIMATE goal is to put pressure on the NHL/NHLPA to work diligently so that we do not lose any time this season, by forcing them to answer to the fans.

That is a lofty and noble goal, FOF. I don't know that it's realistic, but I do wish fans had a bit more leverage in this negotiated split-up of fan dollars.

I wrote a post a few weeks ago about my role in future lockouts, and in that post I made a lockout pledge -- for every day this lockout lasts, I will withhold my money from the NHL for the same number of days afterwards. Similarly, FOF has put together a lockout pledge, though it's tough to gauge how serious this might turn out.

Our Demand: If there is another lockout, I personally will not be returning as a ticket holder until there is a new commissioner, and I hope you join me.

His is not a full boycott, but it lasts for a really uncertain amount of time. For all we know, Gary Bettman might be commissioner forever. But FOF does at least make a pledge that goes after what he perceives to be the problem -- Commissioner Lockout.

I am a New York Rangers season ticket holder, so I apologize in advance for any New York bias I will undoubtedly have. I am NOT a member of the media, just a fan who is fed up, but I will do my best to not let my allegiance affect the opinions on the entire league.

This is why FOF's pledge may not work very well -- seems the Rangers will sell out their hockey with or without him. It's really tough to make any real threat as an individual fan, but if the website can generate enough fan enthusiasm, perhaps enough fans could make their collective dollar impact felt at the negotiating table.

It just seems so far away from happening...

My season tickets cost $36 a ticket the year after the lockout. That same seat will cost me $79 a ticket next season. 1 seat used to cost me $1620 per season, and now it is costing me $3555 per season. Meanwhile the cap is still more than 20 million less than the Ranger's salary pre-lockout, so I fail to see why ticket prices needed to increase that much...

This is a really good perspective -- I myself am too lazy to go see what things cost me six years ago, but one thing I think has happened is the price of parking has gone up a ton since last lockout. Maybe from $7 to $25 per game or something? I kind of wonder if that's a strategic shift by the Ducks to boost some (perhaps) non-hockey-related revenue, but really I should research more before saying anything too strongly there.

By contrast, FOF has done his spending history research, and his personal-cost story is pretty telling.

My Opinions (based on facts)

I'm just a fan of the silliness of this section header. The qualifier in the parentheses does well to differentiate FOF from Bryan Reynolds. :)

This may be the crux of FOF's argument, and I'm pretty on-board with it. I feel like I'm very pro-union in this year's CBA negotiations (even before reading NoHockeyLockout) -- the owners got nearly everything they wanted last lockout, but built in a way to cheat their system and exploited it like hell. If Gary Bettman thinks that the league is spending too much on player salaries, that's because they built a salary cap system with leaks all over it, then over the life of the CBA owners milked the leaks like crazy.

Fix the leaks, Gary, and you can solve your problem. Players don't get to write their own contracts; don't make them accountable for what teams have over-offered to pay. My take, anyways.

This post ended up being a bit rushed, and I probably came down a bit hard on a site that's not even through its initial development. After all, I was once a new blogger, and it does take some time to develop the right rhythm and tone, so no offense intended, FOF. You've even warned me:

Note: Most of these are scattered thoughts that will be developed into full (properly written) articles when the site goes live.

So go check it out, BoCers and friends. Know that it's a work-in-progress, but still -- I think there's enough there to warrant a read-through and see what FOF has in store, and I'll link the site again once it seems "live".

And hey, I even made a not-that-great, unrequested site logo! I don't really have much experience in lock cutting, but that's the gimmick: 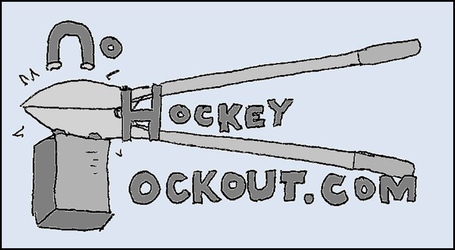 The "H" in Hockey was supposed to be a bit more incorporated in the lock cutting tool, but hey -- I'll develop it into a full (properly drawn) blog logo when the site goes live. :)