This year, the Olympics have featured a runner without natural legs, and I'm freaking stoked.

Oscar Pistorius didn't win his individual race, though he still has a chance at a medal as part of the South African relay team - but it doesn't matter to me if he leaves the Olympics empty-handed. And I'm also not really interested in the "heartwarming inspiration and testament to the power of the human spirit" angle.

The reason this is so exciting is - and I can hardly believe I'm actually typing this sentence - there is a man who has no legs who runs fast enough to participate in the Olympics.

Pay close attention to what I am saying: A LEGLESS MAN RUNS FASTER THAN YOU.

What a crazy time to be alive, huh?

There are some people out there who aren't happy about this. Some are saying that the artificial legs Pistorius uses give him an unfair advantage. You can read a bit about the controversy here, but I feel that the argument sort of misses the larger and more important issue here, namely HE DOESN'T HAVE LEGS BUT HE IS SO FAST.

Here's the thing: even if Pistorius doesn't win anything this year, by the time the next Summer Olympics comes around synthetic limbs will only have gotten better. That's how technology works. A smart phone has more computer power than all of NASA did in 1969. A PS3 is as powerful as a military supercomputer from 1997. Sometime in the next couple of decades artificial limbs will be so advanced that they will be clearly better than real ones.

It's going to totally blow up sports as we know it, and I am really excited about it.

Our cyborg future will be an incredible and confusing time, and sports will likely be the first area of society to have to address many of the once-unthinkable questions that will arise. Here are just a couple of issues that will probably come up during the next couple of decades:

1. If robot limbs are superior to real limbs, does that mean nobody with robot limbs can compete in "regular" sports? What about if they just have a robot foot or something? How do we decide if somebody is too much of a robot to compete with "normal" people?

2. If robotically-enhanced athletes are banned from normal competition, will we see the emergence of parallel leagues? The Cyborg Hockey League, where slapshots reach 200 miles an hour? A Cyborg Olympics where previous world records are routinely shattered, and technology is just as important as biology? And, if these things do exist, won't they be fucking awesome?

3. If robotically-enhanced athletes are allowed to compete in normal competition, will we see a rise in elective amputation (as discussed in this article, which is cool, even though the author thinks Oscar Pistorius is running for "South America")?

4. When (not "if") robot limbs are better than real ones, it may become common for people to seek robotic replacement for "normal" limbs - especially as they age - so if this enhancement is acceptable in the general population, why would athletes be any different? Will we require/expect our athletes to be the only ones without robot limbs? And why would anyone care how fast an Olympian can run if the average robot-legged citizen can run faster? 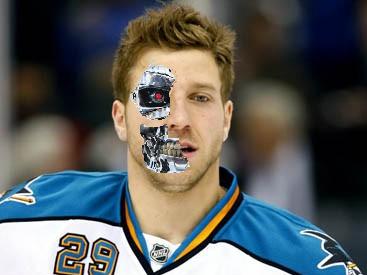 I haven't even discussed the biological enhancement that will be possible before too much longer, including things like gene therapy and reaction-time shortening neuro-enhancers. This may sound like science fiction, but it is all going to happen - and it might not be too far off. You can read a good overview of the athlete of the future here.

Much of what I've discussed in this post falls under the heading of "transhumanism," the idea that in the future we will be able to combine technology and biology to make ourselves more than "human." There's an entertaining quiz you can take about transhumanism here, where you can test yourself to see how comfortable you are with the advancements that are on the way.

There's a brave new world coming, and sports will be one of the first parts of our culture that will feel the change.

Strap on your robot sex pants, people. This is going to be fucking nuts.