In the spirit of the wildly popular thing I did a couple of years ago, Wiki-Sharks, today we begin an examination of the Twitter accounts of the various San Jose Sharks players and personalities. We'll begin with the hilarious exciting highly-active twitter account of Ryane Clowe.

This is Clowe's 2nd tweet ever, and it's pretty sweet. He uses the wrong "there" and doesn't understand hashtags. It's an exciting preview of the next 200+ tweets Ryane would share with the world.

"Greatest people in the world" in Newfoundland? Mr. Clowe, I'm calling you a liar. 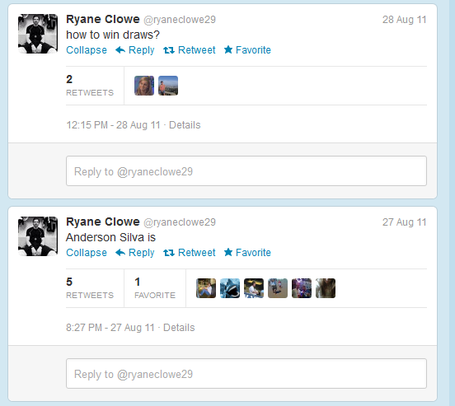 These two consecutive tweets represent the low point of Ryane's twitter career. He's since picked up his game a bit.

Clowe has been tweeting since April of 2011, but he isn't very active. By way of comparison, I average about 29 tweets/retweets a week, so...

I should probably just kill myself.

Clowe has some some issues with the finer points of English, but don't worry - a C+ qualifies him to teach grammar and composition at the greatest university/lumber mill in Newfoundland!

While most of Clowe's tweets these days are about either some charity thing, the San Francisco Giants, or the lockout, all of which are pretty boring, he will never ever drop below a C on the entertainment scale because of the time he made fun of Logan Couture: