Yeah, yeah. The NHL Owners say they're united. And the NHLPA says it's united. But you know who's really united? SB Nation! Well, pretty soon, that is. :)

It’s with great pleasure that I unveil the first step in the next evolution of BoC. In the next month SB Nation will be undergoing a dramatic upgrade to our platform and our editorial process. There will be much more detail to come but for now, the new logo below is just a first taste of what is coming for Battle of California.

This is a small, but important sample of what is coming when our network undergoes its most exciting and radical transformation in the eight-year history of the company. A new visual identity here and across the network is only one step we are taking to unite our network of sites. United through individuality is the underlying theme of this project. You’ll notice that our team colors and the unique spirit of our individual community is maintained while making it clear to sports fans that each site is a part of the larger SB Nation network. We want everyone to know that they can find the same type of great writing, video and conversation that we offer here on all of our 300 plus sites. You can browse through all the new logos on a special page we put together at sbnation.com/united.

Our commitment to passionately follow our sports will never end. It’s what makes SB Nation a special place and that will only be enhanced by these new changes. In the meantime we’re setting up additions to our store so you can be sporting the latest and greatest before it even launches. Welcome to our future.

What the -- we have a store?! Oops -- maybe I was supposed to edit that part out of the customizable announcement. :)

So, you want to see the new logo?

Coming soon to a 3-team hockey blog near you... 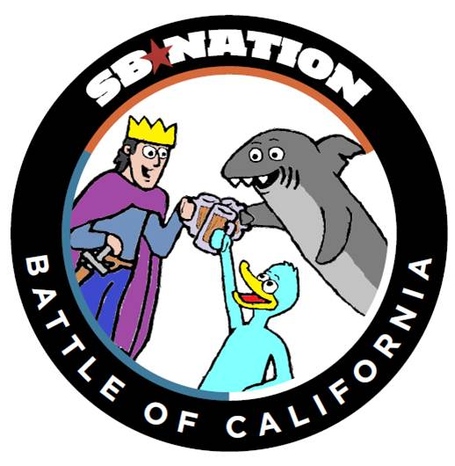 Now I know that the "What a bunch of morons" thought bubble is a key component from the last logo that didn't survive to this new edition, but with the circular format that Unites™ us all, plus the fact that this logo will probably appear very small at times, I didn't push too hard to keep it. That's not to say that I don't already miss it -- in a lot of ways, that captured the spirit of this blog very well.

But I was pretty insistent that the overall silly feel of the logo remain -- so insistent, in fact, that I was pretty quickly tasked with drawing the damn thing myself! To be fair -- it's not like the SB Nation Logomaster did anything wrong with his initial take. This is also a very fine blog logo: 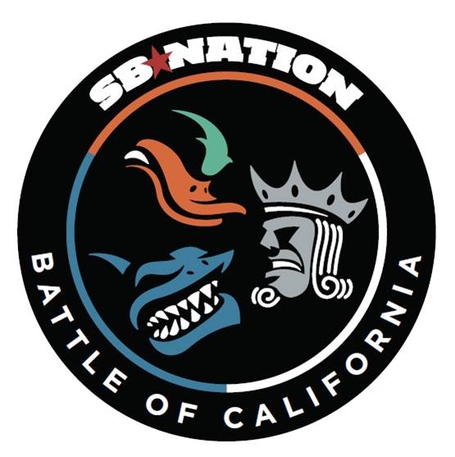 It looks fantastic, but I really wasn't thrilled with how angry the three BoC characters were -- sure, on the ice, California teams hate each other. But on this blog, it's always been a bit different than that -- yeah we're cruel and lawless, but we're more jokers than haters, and that's why this blog's hopefully fun for fans of all three teams. After all, I've got more in common with Kings and Sharks fans than I do with Rangers and Flyers fans, or than I do with Lakers or Angels fans. It's a crazy thought, but it might be that BoC is the most United of all SB Nation United blogs. :)

So I opted out of the angry-character design, was then tasked to draw the logo myself (Logomaster: "The only thing I need is for it to be in vector." Me: "What's vector?"), and Sleektooned up a blog logo. Good thing I had some practice!

And yes, changes are coming to the SBN network of blogs that go well beyond new logos, but don't fret! As far as I've heard (and I'm not at all in the know, but I have watched two intro videos), these are enhancements to better present content, but we'll still be in control of that content -- there's going to be more options with the new design, and we'll find out soon enough how we use them.

Progress is being made. And BoC United is on board.