Chicago comes to town to behold the Kings' magnificence and remember that they used to be good once, too

Hello jerks! Today's game will be awesome regardless of the outcome, and I can guarantee that. The Kings are raising their Stanley Cup Champions of Fucking Everything, and Everyone Else Sucks banner and I have a bottle of mescal. I already have the ambulance waiting for me outside. As for the game, the Kings are obviously the reigning power of the gods, and the Blackhawks are a shell of their former selves. Still, in this half-assed season of apologies and schedule on meth every game is going to be important. Unless the Kings lose. Then it's not important. Anze Kopitar is out with a bad knee, and Willie Mitchell is out with an even worse knee. Filling in will be Jeff Carter going to center (which is a worrisome prospect) and Davis Drewiske getting some ice time for the first time since Game of Thrones was last on. The Kings are looking like they will roll with Alec Martinez and Slava Voynov as a pairing with Mitchell out. Whether this winds up being a great offensive combo with decent speed or an exploitable duo that's slightly undersized is my guess for what will be the main takeaway. I think at this point Martinez is rounding out his game, and Voynov was never too much of a liability already.

To get myself all geared up for the Kings returning, I decided to get my goalie shit out of storage and return to kicking ass. Except that I didn't have the key to my parents' storage unit. Instead I borrowed my buddy's roller blades and proceeded to skate around the neighborhood like a Venice Beach douche bag. I even had a chance to meet up with Jer. 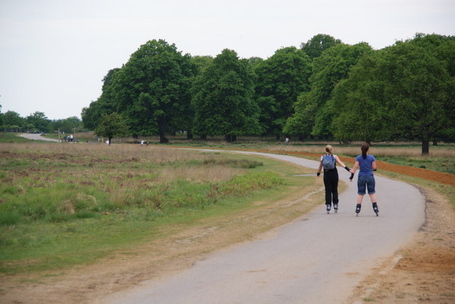 It's a very good thing the Kings are back.

- Drew Doughty had a soccer moment, and still committed an own goal.

- Matt Greene got burned like pubes during a "Charizard".

- Patrick Kane got laid out by a linesman.

- The mescal is quite inebriating.

- Voynov and Martinez are in fact a pretty shitty combo.

- Greene and Martinez look beyond awful.

- I start playing Knights of the Old Republic again. Not a good sign Kings.

- The mescal proves too much. How the fuck did people drink this shit?